Seite - 674 - in Jacopo Strada and Cultural Patronage at the Imperial Court - The Antique as Innovation, Band 2 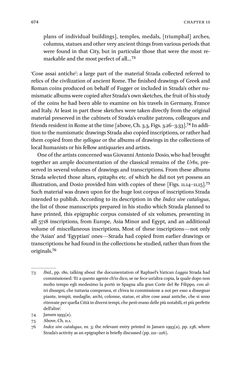 Chapter 13674 plans of individual buildings], temples, medals, [triumphal] arches, columns, statues and other very ancient things from various periods that were found in that City, but in particular those that were the most re- markable and the most perfect of all…73 ‘Cose assai antiche’: a large part of the material Strada collected referred to relics of the civilization of ancient Rome. The finished drawings of Greek and Roman coins produced on behalf of Fugger or included in Strada’s other nu- mismatic albums were copied after Strada’s own sketches, the fruit of his study of the coins he had been able to examine on his travels in Germany, France and Italy. At least in part these sketches were taken directly from the original material preserved in the cabinets of Strada’s erudite patrons, colleagues and friends resident in Rome at the time [above, Ch. 3.3, Figs. 3.26–3.33].74 In addi- tion to the numismatic drawings Strada also copied inscriptions, or rather had them copied from the syllogae or the albums of drawings in the collections of local humanists or his fellow antiquaries and artists. One of the artists concerned was Giovanni Antonio Dosio, who had brought together an ample documentation of the classical remains of the Urbs, pre- served in several volumes of drawings and transcriptions. From these albums Strada selected those altars, epitaphs etc. of which he did not yet possess an illustration, and Dosio provided him with copies of these [Figs. 11.14–11.15].75 Such material was drawn upon for the huge lost corpus of inscriptions Strada intended to publish. According to its description in the Index sive catalogus, the list of those manuscripts prepared in his studio which Strada planned to have printed, this epigraphic corpus consisted of six volumes, presenting in all 5718 inscriptions, from Europe, Asia Minor and Egypt, and an additional volume of miscellaneous inscriptions. Most of these inscriptions—not only the ‘Asian’ and ‘Egyptian’ ones—Strada had copied from earlier drawings or transcriptions he had found in the collections he studied, rather than from the originals.76 73 Ibid., pp. 180, talking about the documentation of Raphael’s Vatican Loggia Strada had commissioned: ‘Et a questo agente ch’io dico, se ne fece un’altra copia, la quale dopo non molto tempo egli medesimo la portò in Spagna alla gran Corte del Re Filippo, con al- tri dissegni, che tuttavia comperava, et ch’era in commissione a noi per esso a dissegnar piante, tempii, medaglie, archi, colonne, statue, et altre cose assai antiche, che si sono ritrovate per quella Città in diversi tempi, che però erano delle più notabili, et più perfette dell’altre’. 74 Jansen 1993(a). 75 Above, Ch. 11.1. 76 Index sive catalogus, nr. 3; the relevant entry printed in Jansen 1993(a), pp. 238, where Strada’s activity as an epigrapher is briefly discussed (pp. 221–226).
zurück zum  Buch Jacopo Strada and Cultural Patronage at the Imperial Court - The Antique as Innovation, Band 2"
Jacopo Strada and Cultural Patronage at the Imperial Court The Antique as Innovation, Band 2