Seite - 774 - in Jacopo Strada and Cultural Patronage at the Imperial Court - The Antique as Innovation, Band 2 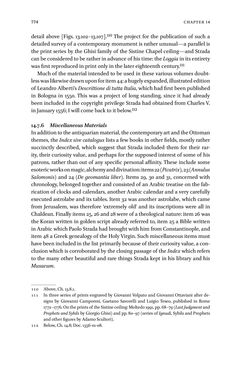 Chapter 14774 detail above [Figs. 13.102–13.107].110 The project for the publication of such a detailed survey of a contemporary monument is rather unusual—a parallel is the print series by the Ghisi family of the Sistine Chapel ceiling—and Strada can be considered to be rather in advance of his time: the Loggia in its entirety was first reproduced in print only in the later eighteenth century.111 Much of the material intended to be used in these various volumes doubt- less was likewise drawn upon for item 44: a hugely expanded, illustrated edition of Leandro Alberti’s Descrittione di tutta Italia, which had first been published in Bologna in 1550. This was a project of long standing, since it had already been included in the copyright privilege Strada had obtained from Charles V. in January 1556; I will come back to it below.112 14.7.6 Miscellaneous Materials In addition to the antiquarian material, the contemporary art and the Ottoman themes, the Index sive catalogus lists a few books in other fields, mostly rather succinctly described, which suggest that Strada included them for their rar- ity, their curiosity value, and perhaps for the supposed interest of some of his patrons, rather than out of any specific personal affinity. These include some esoteric works on magic, alchemy and divination: items 22 (Picatrix), 23 (Annulus Salomonis) and 24 (De geomantia liber). Items 29, 30 and 31, concerned with chronology, belonged together and consisted of an Arabic treatise on the fab- rication of clocks and calendars, another Arabic calendar and a very carefully executed astrolabe and its tables. Item 32 was another astrolabe, which came from Jerusalem, was therefore ‘extremely old’ and its inscriptions were all in Chaldean. Finally items 25, 26 and 28 were of a theological nature: item 26 was the Koran written in golden script already referred to, item 25 a Bible written in Arabic which Paolo Strada had brought with him from Constantinople, and item 48 a Greek genealogy of the Holy Virgin. Such miscellaneous items must have been included in the list primarily because of their curiosity value, a con- clusion which is corroborated by the closing passage of the Index which refers to the many other beautiful and rare things Strada kept in his library and his Musaeum. 110 Above, Ch. 13.8.1. 111 In three series of prints engraved by Giovanni Volpato and Giovanni Ottaviani after de- signs by Giovanni Camporesi, Gaetano Savorelli and Luigio Teseo, published in Rome 1772–1776. On the prints of the Sistine ceiling: Moltedo 1991, pp. 68–79 (Last Judgment and Prophets and Sybils by Giorgio Ghisi) and pp. 80–97 (series of Ignudi, Sybils and Prophets and other figures by Adamo Scultori). 112 Below, Ch. 14.8; Doc. 1556-01-08.
zurück zum  Buch Jacopo Strada and Cultural Patronage at the Imperial Court - The Antique as Innovation, Band 2"
Jacopo Strada and Cultural Patronage at the Imperial Court The Antique as Innovation, Band 2