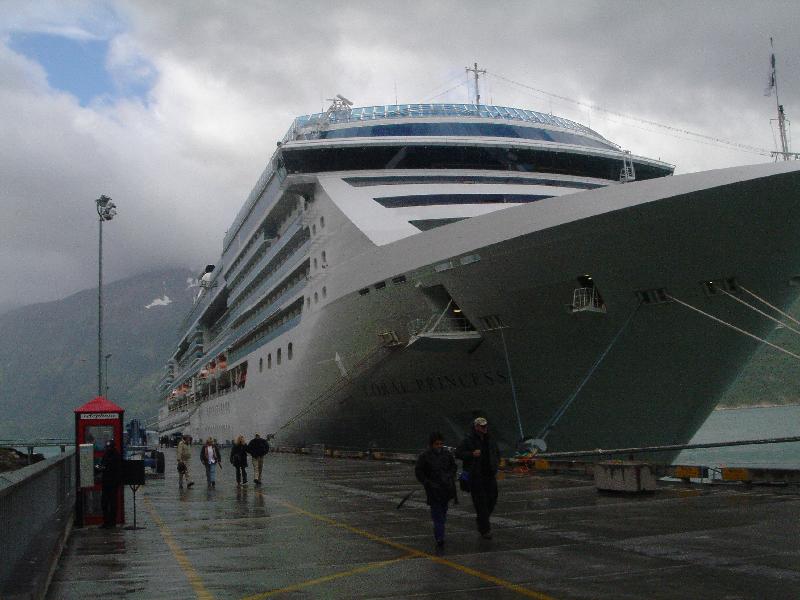 Skagway
Photo: H. Maurer, Fall 2005
When we wake up we are already moored in Skagway, see Open street map or Google Skagway, AK, USA , once door to the Klondike Gold-Rush: using one of two treacherous paths gold-seekers had to dross from there the mountain ridge (between 1000 and 1500 m) in deep snow, and carrying with them one ton of supplies for the first year, or the Canadian would not leave them into the Yukon area. Mind you, once they had managed the 300 km to Whitehorse (and many did not), they still had to travel hundreds of miles North to the Klondike, to Dawson City Skagway, Ak, Whitehorse, Canada, Dawson City, Canada .

Skagway in its hay-days (starting in 1896) had some thousand inhabitants: today it has 500 in the winter, but many more during the summer (May to end of September) when daily about 10.000 (!!!) tourists visit the city, mainly by cruise ship. In our instance, 4 big cruise ships where docked, amounting to about 8.000 persons, and this at the end of the season.

So, Skagway lives on tourists: shopping and excursions. ‘Broadway’, the main street is lined with souvenir shops on both sides for a mile or so, interrupted only by the occasional bar, the most famous the Red Onion Saloon where there is a guided tour of the former upstairs brothel.