Seite - 754 - in Jacopo Strada and Cultural Patronage at the Imperial Court - The Antique as Innovation, Band 2 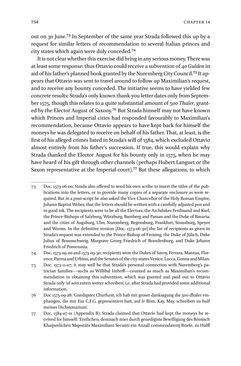 Chapter 14754 out on 30 June.73 In September of the same year Strada followed this up by a request for similar letters of recommendation to several Italian princes and city states which again were duly conceded.74 It is not clear whether this exercise did bring in any serious money. There was at least some response: thus Ottavio could receive a subvention of 40 Gulden in aid of his father’s planned book granted by the Nuremberg City Council.75 It ap- pears that Ottavio was sent to travel around to follow up Maximilian’s request, and to receive any bounty conceded. The initiative seems to have yielded few concrete results: Strada’s only known thank-you letter dates only from Septem- ber 1575, though this relates to a quite substantial amount of 500 Thaler, grant- ed by the Elector August of Saxony.76 But Strada himself may not have known which Princes and Imperial cities had responded favourably to Maximilian’s recommendation, because Ottavio appears to have kept back for himself the moneys he was delegated to receive on behalf of his father. That, at least, is the first of his alleged crimes listed in Strada’s will of 1584, which excluded Ottavio almost entirely from his father’s succession. If true, this would explain why Strada thanked the Elector August for his bounty only in 1575, when he may have heard of his gift through other channels (perhaps Hubert Languet or the Saxon representative at the Imperial court).77 But these allegations, to which 73 Doc. 1573-06-00; Strada also offered to send his own scribe to insert the titles of the pub- lications into the letters, or to provide many copies of a separate enclosure as were re- quired. But in a post-script he also asked the Vice Chancellor of the Holy Roman Empire, Johann Baptist Weber, that the letters should be written with a carefully adjusted pen and in good ink. The recipients were to be all the Electors, the Archdukes Ferdinand and Karl, the Prince-Bishops of Salzburg, Würzburg, Bamberg and Passau and the Duke of Bavaria; and the cities of Augsburg, Ulm, Nuremberg, Regensburg, Frankfurt, Strassburg, Speyer and Worms. In the definitive version [Doc. 1573-06-30] the list of recipients as given in Strada’s request was extended to the Prince-Bishop of Freising, the Duke of Jülich, Duke Julius of Braunschweig, Margrave Georg Friedrich of Brandenburg, and Duke Johann Friedrich of Pomerania. 74 Doc. 1573-09-00 and 1573-09-30; recipients were the Dukes of Savoy, Ferrara, Mantua, Flor- ence, Parma and Urbino, and the Senates of the city-states Venice, Lucca, Genoa and Milan. 75 Doc. 1573-11-07; it may well be that Strada’s personal connection with Nuremberg’s pa- trician families—suchs as Willibal Imhoff—counted as much as Maximilian’s recom- mendation in obtaining this subvention, which was granted and paid out to Ottavio Strada only ‘uf sein vaters weiter schreiben’, i.e. after Strada had provided some additional information. 76 Doc 1575-09-28: ‘Gnedigster Churfurst, ich hab mit groser danksagung die 5oo dhaler em- phangen, die mir Eur C.F.G. gepresentiert hatt, auf Ir Röm. Kay. May. schreiben zu hulf meines Dichsionarium’. 77 Doc. 1584-07-01 (Appendix B); Strada claimed that Ottavio had kept the moneys he re- ceived for himself: ‘Erstlichen, demnach mier durch genedigiste Bewilligung des Römisch Khaijserlichen Majestäts Maximiliani Secunti ein Anzall commendatorij Briefe, zu Hülff
zurück zum  Buch Jacopo Strada and Cultural Patronage at the Imperial Court - The Antique as Innovation, Band 2"
Jacopo Strada and Cultural Patronage at the Imperial Court The Antique as Innovation, Band 2