Kathmandu is the nation's capital city and largest metropolis.

The mountainous north of Nepal has eight of the world's ten tallest mountains, including the highest point on Earth, Mount Everest (Nepali: सगरमाथा Sagarmāthā).

Hinduism is practiced by about 81.3% of Nepalis, the highest percentage of any country.

A monarchy throughout most of its history, Nepal was ruled by the Shah dynasty of kings from 1768—when Prithvi Narayan Shah unified its many small kingdoms—until 2008.

A decade-long Civil War involving the Communist Party of Nepal (Maoist), followed by weeks of mass protests by all major political parties, led to the 12-point agreement of 22 November 2005.

The ensuing elections for the 1st Nepali Constituent Assembly on 28 May 2008 overwhelmingly favored the abolition of the monarchy and the establishment of a federal multiparty representative democratic republic.

Despite continuing political challenges, this framework remained in place, with the 2nd Nepali Constituent Assembly elected in 2013 in an effort to create a new constitution.

On September 20, 2015, a new constitution (Nepali: नेपालको संविधान २०७२) was announced by President Ram Baran Yadav in the Constituent Assembly.

Despite these challenges, Nepal has been making steady progress, with the government making a commitment to graduate the nation from least developed country status by 2022.

A mother and child walk past the Bodhnath Stupa, Nepal's largest stupa. 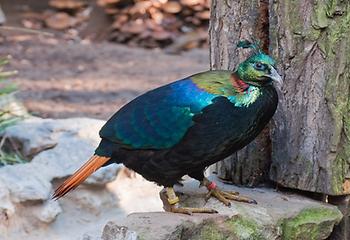