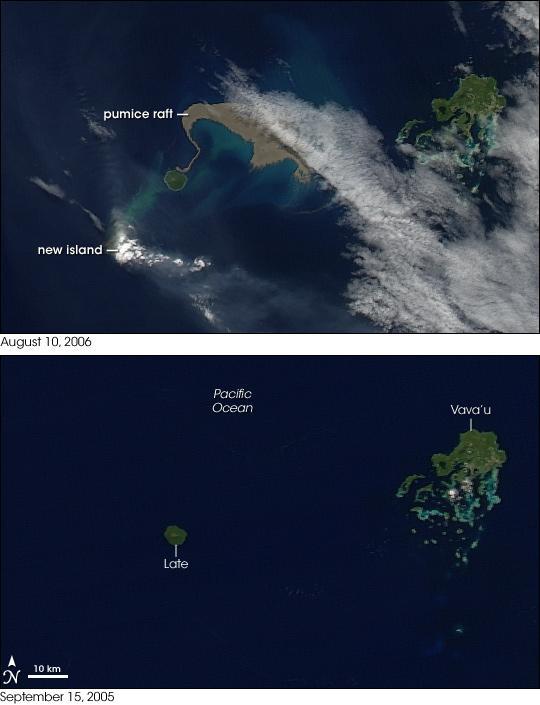 Photo courtesy of NASA., under PD
August 2006 brought two new things to the Tonga Islands Tonga in the South Pacific. One was a raft of lightweight, frothy volcanic rock - pumice - floating on the ocean surface.

The other was a new island emerging out of the water. NASAs Aqua satellite captured the aftermath of the eruption on 10 August 2006. For comparison, the bottom image shows the same area but taken almost one year earlier, on 15 September 2005. The emerging volcanic island is partially hidden by its own plume.

Volcanic plumes often appear drab gray or beige compared to clouds, and plumes from the emerging island move away from it in different directions, one to the southeast, and some to the north. The bright white spot directly over the island may be cloud cover, or it could be steam resulting from volcanic emissions.

The raft of pumice appears to the northeast of the emerging island, and it actually connects, via a thin thread, to neighboring Late Island. The blue-green color of the water around the raft and the new island is probably fine sediment that is making the deep blue water more reflective. The pumice raft gained international attention when a news report described the experience of a yacht crew that inadvertently encountered the pumice raft.

The "sea of stone" clogged the yachts engine-cooling system, forcing the vessel to turn back. Pumice rafts are not an everyday occurrence, but they have been observed before. Biologists theorize that pumice rafts may be one of the ways that plants and animals spread from island to island in marine environments.