Page - 174 - in The Priority of Locomotion in Aristotle’s Physics 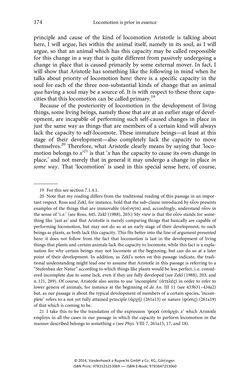 principle and cause of the kind of locomotion Aristotle is talking about here, I will argue, lies within the animal itself, namely in its soul, as I will argue, so that an animal which has this capacity may be called responsible for this change in a way that is quite different from passively undergoing a change in place that is caused primarily by some external mover. In fact, I will show that Aristotle has something like the following in mind when he talks about priority of locomotion here: there is a specific capacity in the soul for each of the three non-substantial kinds of change that an animal qua having a soul may be a source of. It is with respect to these three capa- cities that this locomotion can be called primary.19 Because of the posteriority of locomotion in the development of living things, some living beings, namely those that are at an earlier stage of devel- opment, are incapable of performing such self-caused changes in place in just the same way as things that are members of a certain kind will always lack the capacity to self-locomote. These immature beings—at least at this stage of their development—also completely lack the capacity to move themselves.20 Therefore, what Aristotle clearly means by saying that ‘loco- motion belongs to x’21 is that ‘x has the capacity to cause its own change in place,’ and not merely that in general it may undergo a change in place in some way. That ‘locomotion’ is used in this special sense here, of course, 19 For this see section 7.1.4.1. 20 Note that my reading differs from the traditional reading of this passage in an impor- tant respect. Ross and Zekl, for instance, hold that the sub-clause introduced by οἷον presents examples of the things that are immovable (ἀκίνητα) and, accordingly, understand οἷον in the sense of ‘i.e.’ (see Ross, 445, Zekl (1988), 203.) My view is that the oἷον stands for some- thing like ‘just as’ and that Aristotle is merely comparing things that basically are capable of performing locomotion, but may not do so at an early stage of their development, to such beings as plants, as both lack this capacity. This fits better into the line of argument presented here: it does not follow from the fact that locomotion is last in the development of living things that plants and certain animals lack the capacity to locomote, while this fact is a expla- nation for why certain beings may not locomote at the beginning, but can do so at a later point of their development. In addition, as Zekl’s notes on this passage indicate, the tradi- tional understanding might lead one to assume that Aristotle in this passage is referring to a “Stufenbau der Natur” according to which things like plants would be less perfect, i.e. consid- ered incomplete due to some lack, even if they are fully developed (see Zekl (1988), 203, and n.121, 289). Of course, Aristotle also seems to use ‘incomplete’ (ἀτελές) in order to refer to lower genera of animals, for instance at the beginning of de An. III 11 (see 433b31–434a2) but, as our passage is about the typical development of members of a certain species, ‘incom- plete’ refers to a not yet fully attained principle (ἀρχή) (261a13) or nature (φύσις) (261a19) of that which is coming to be. 21 I take this to be the translation of the expression ‘φορά ὑπάρχει x’ which Aristotle employs in all the cases in our passage in which the capacity to perform locomotion in the manner described belongs to something x (see Phys. VIII 7, 261a15, 17, and 18). 174 Locomotion is prior in essence ISBN Print: 9783525253069 — ISBN E-Book: 9783647253060 © 2014, Vandenhoeck & Ruprecht GmbH & Co. KG, Göttingen
back to the  book The Priority of Locomotion in Aristotle’s Physics"
The Priority of Locomotion in Aristotle’s Physics