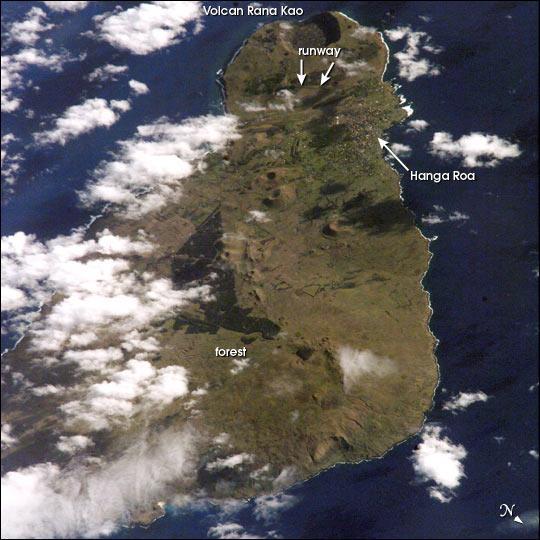 Image courtesy of NASA., under PD
View of Easter Island from space. The island is one of the most remote locations on Earth, being more than 3,200 km (2,000 mi) from the closest populations on Tahiti or Chile. The island is perhaps most famous for the giant stone monoliths, known as moai, that have been placed along the coastline.

Archaeologists believe the island was discovered and colonized by Polynesians sometime between A.D. 400 and 700. Subsequently, a unique culture developed. The human population grew to levels that could not be sustained by the island. A civil war resulted, and the islands deforestation and ecosystem collapse was nearly complete. Today, a new forest (primarily eucalyptus) has been established in the center of the island (dark green).

Less than 25 km (15 mi) long, the geography of the island is dominated by volcanic landforms, including the large crater Rana Kao at the southwest end of the island and a line of cinder cones that stretch north from the central mountain. A final feature (difficult to see) is the very long runway (Chiles longest) near Rana Kao, which served (but was never used) as an emergency landing site for the Space Shuttle.