Seite - 49 - in The Priority of Locomotion in Aristotle’s Physics 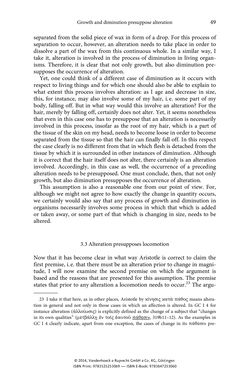 separated from the solid piece of wax in form of a drop. For this process of separation to occur, however, an alteration needs to take place in order to dissolve a part of the wax from this continuous whole. In a similar way, I take it, alteration is involved in the process of diminution in living organ- isms. Therefore, it is clear that not only growth, but also diminution pre- supposes the occurrence of alteration. Yet, one could think of a different case of diminution as it occurs with respect to living things and for which one should also be able to explain to what extent this process involves alteration: as I age and decrease in size, this, for instance, may also involve some of my hair, i.e. some part of my body, falling off. But in what way would this involve an alteration? For the hair, merely by falling off, certainly does not alter. Yet, it seems nonetheless that even in this case one has to presuppose that an alteration is necessarily involved in this process, insofar as the root of my hair, which is a part of the tissue of the skin on my head, needs to become loose in order to become separated from the tissue so that the hair can finally fall off. In this respect the case clearly is no different from that in which flesh is detached from the tissue by which it is surrounded in other instances of diminution. Although it is correct that the hair itself does not alter, there certainly is an alteration involved. Accordingly, in this case as well, the occurrence of a preceding alteration needs to be presupposed. One must conclude, then, that not only growth, but also diminution presupposes the occurrence of alteration. This assumption is also a reasonable one from our point of view. For, although we might not agree to how exactly the change in quantity occurs, we certainly would also say that any process of growth and diminution in organisms necessarily involves some process in which that which is added or taken away, or some part of that which is changing in size, needs to be altered. 3.3 Alteration presupposes locomotion Now that it has become clear in what way Aristotle is correct to claim the first premise, i.e. that there must be an alteration prior to change in magni- tude, I will now examine the second premise on which the argument is based and the reasons that are presented for this assumption. The premise states that prior to any alteration a locomotion needs to occur.23 The argu- 23 I take it that here, as in other places, Aristotle by κίνησις κατὰ πάθος means altera- tion in general and not only in those cases in which an affection is altered. In GC I 4 for instance alteration (ἀλλοίωσις) is explicitly defined as the change of a subject that “changes in its own qualities” (μετβάλλῃ ἐν τοῖς ἑαυτοῦ πάθεσιν, 319b11–12). As the examples in GC I 4 clearly indicate, apart from one exception, the cases of change in its πάθεσιν pre- Growth and diminution presuppose alteration 49 ISBN Print: 9783525253069 — ISBN E-Book: 9783647253060 © 2014, Vandenhoeck & Ruprecht GmbH & Co. KG, Göttingen
zurück zum  Buch The Priority of Locomotion in Aristotle’s Physics"
The Priority of Locomotion in Aristotle’s Physics