Seite - 150 - in The Priority of Locomotion in Aristotle’s Physics 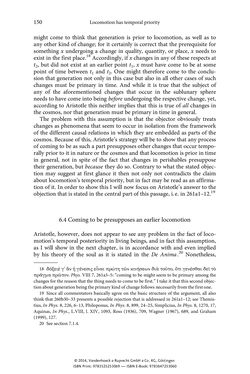 might come to think that generation is prior to locomotion, as well as to any other kind of change; for it certainly is correct that the prerequisite for something x undergoing a change in quality, quantity, or place, x needs to exist in the first place.18 Accordingly, if x changes in any of these respects at t2, but did not exist at an earlier point t1, x must have come to be at some point of time between t1 and t2. One might therefore come to the conclu- sion that generation not only in this case but also in all other cases of such changes must be primary in time. And while it is true that the subject of any of the aforementioned changes that occur in the sublunary sphere needs to have come into being before undergoing the respective change, yet, according to Aristotle this neither implies that this is true of all changes in the cosmos, nor that generation must be primary in time in general. The problem with this assumption is that the objector obviously treats changes as phenomena that seem to occur in isolation from the framework of the different causal relations in which they are embedded as parts of the cosmos. Because of this, Aristotle’s strategy will be to show that any process of coming to be as such a part presupposes other changes that occur tempo- rally prior to it in nature or the cosmos and that locomotion is prior in time in general, not in spite of the fact that changes in perishables presuppose their generation, but because they do so. Contrary to what the stated objec- tion may suggest at first glance it then not only not contradicts the claim about locomotion’s temporal priority, but in fact may be read as an affirma- tion of it. In order to show this I will now focus on Aristotle’s answer to the objection that is stated in the central part of this passage, i.e. in 261a1–12.19 6.4 Coming to be presupposes an earlier locomotion Aristotle, however, does not appear to see any problem in the fact of loco- motion’s temporal posteriority in living beings, and in fact this assumption, as I will show in the next chapter, is in accordance with and even implied by his theory of the soul as it is stated in the De Anima.20 Nonetheless, 18 δόξειέ γ᾽ ἂν ἡ γένεσις εἶναι πρώτη τῶν κινήσεων διὰ τοῦτο, ὅτι γενέσθαι δεῖ τὸ πρᾶγμα πρῶτον. Phys. VIII 7, 261a3–5: “coming to be might seem to be primary among the changes for the reason that the thing needs to come to be first.” I take it that this second objec- tion about generation being the primary kind of change follows necessarily from the first one. 19 Since all commentators basically agree on the basic structure of the argument, all also think that 260b30–33 presents a possible rejection that is addressed in 261a1–12; see Themis- tius, In Phys. 8, 226, 6–13, Philoponus, In Phys. 8, 899, 24–25, Simplicius, In Phys. 8, 1270, 17, Aquinas, In Phys., L.VIII, l. XIV, 1093, Ross (1936), 709, Wagner (1967), 689, and Graham (1999), 127. 20 See section 7.1.4. 150 Locomotion has temporal priority ISBN Print: 9783525253069 — ISBN E-Book: 9783647253060 © 2014, Vandenhoeck & Ruprecht GmbH & Co. KG, Göttingen
zurück zum  Buch The Priority of Locomotion in Aristotle’s Physics"
The Priority of Locomotion in Aristotle’s Physics