Seite - 88 - in The Priority of Locomotion in Aristotle’s Physics 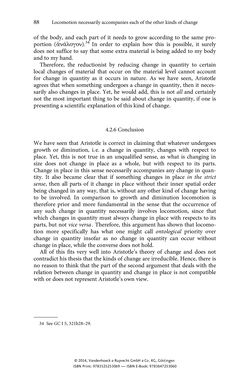 of the body, and each part of it needs to grow according to the same pro- portion (ἀνάλογον).34 In order to explain how this is possible, it surely does not suffice to say that some extra material is being added to my body and to my hand. Therefore, the reductionist by reducing change in quantity to certain local changes of material that occur on the material level cannot account for change in quantity as it occurs in nature. As we have seen, Aristotle agrees that when something undergoes a change in quantity, then it neces- sarily also changes in place. Yet, he would add, this is not all and certainly not the most important thing to be said about change in quantity, if one is presenting a scientific explanation of this kind of change. 4.2.6 Conclusion We have seen that Aristotle is correct in claiming that whatever undergoes growth or diminution, i.e. a change in quantity, changes with respect to place. Yet, this is not true in an unqualified sense, as what is changing in size does not change in place as a whole, but with respect to its parts. Change in place in this sense necessarily accompanies any change in quan- tity. It also became clear that if something changes in place in the strict sense, then all parts of it change in place without their inner spatial order being changed in any way, that is, without any other kind of change having to be involved. In comparison to growth and diminution locomotion is therefore prior and more fundamental in the sense that the occurrence of any such change in quantity necessarily involves locomotion, since that which changes in quantity must always change in place with respects to its parts, but not vice versa. Therefore, this argument has shown that locomo- tion more specifically has what one might call ontological priority over change in quantity insofar as no change in quantity can occur without change in place, while the converse does not hold. All of this fits very well into Aristotle’s theory of change and does not contradict his thesis that the kinds of change are irreducible. Hence, there is no reason to think that the part of the second argument that deals with the relation between change in quantity and change in place is not compatible with or does not represent Aristotle’s own view. 34 See GC I 5, 321b28–29. 88 Locomotion necessarily accompanies each of the other kinds of change ISBN Print: 9783525253069 — ISBN E-Book: 9783647253060 © 2014, Vandenhoeck & Ruprecht GmbH & Co. KG, Göttingen
zurück zum  Buch The Priority of Locomotion in Aristotle’s Physics"
The Priority of Locomotion in Aristotle’s Physics