Seite - 190 - in The Priority of Locomotion in Aristotle’s Physics 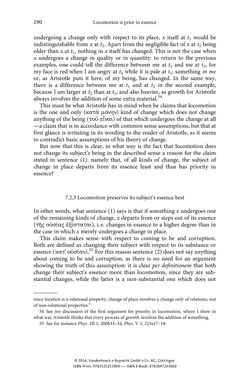 undergoing a change only with respect to its place, x itself at t1 would be indistinguishable from x at t2. Apart from the negligible fact of x at t2 being older than x at t1, nothing in x itself has changed. This is not the case when x undergoes a change in quality or in quantity: to return to the previous examples, one could tell the difference between me at t1 and me at t2, for my face is red when I am angry at t2 while it is pale at t1; something in me or, as Aristotle puts it here, of my being, has changed. In the same way, there is a difference between me at t1 and at t2 in the second example, because I am larger at t2 than at t1, and also heavier, as growth for Aristotle always involves the addition of some extra material.54 This must be what Aristotle has in mind when he claims that locomotion is the one and only (κατὰ μόνην) kind of change which does not change anything of the being (τοῦ εἶναι) of that which undergoes the change at all —a claim that is in accordance with common sense assumptions, but that at first glance is irritating in its wording to the reader of Aristotle, as it seems to contradict basic assumptions of his theory of change. But now that this is clear, in what way is the fact that locomotion does not change its subject’s being in the described sense a reason for the claim stated in sentence (1), namely that, of all kinds of change, the subject of change in place departs from its essence least and thus has priority in essence? 7.2.3 Locomotion preserves its subject’s essence best In other words, what sentence (1) says is that if something x undergoes one of the remaining kinds of change, x departs from or steps out of its essence (τῆς οὐσίας ἐξίσταται), i.e. changes in essence to a higher degree than in the case in which x merely undergoes a change in place. This claim makes sense with respect to coming to be and corruption. Both are defined as changing their subject with respect to its substance or essence (κατ᾽ οὐσίαν).55 For this reason sentence (2) does not say anything about coming to be and corruption, as there is no need for an argument showing the truth of this assumption: it is clear per definitionem that both change their subject’s essence more than locomotion, since they are sub- stantial changes, while the latter is a non-substantial one which does not since location is a relational property, change of place involves a change only of relations, not of non-relational properties.” 54 See my discussion of the first argument for priority in locomotion, where I show in what way Aristotle thinks that every process of growth involves the addition of something. 55 See for instance Phys. III 1, 200b33–34, Phys. V 1, 225a17–18. 190 Locomotion is prior in essence ISBN Print: 9783525253069 — ISBN E-Book: 9783647253060 © 2014, Vandenhoeck & Ruprecht GmbH & Co. KG, Göttingen
zurück zum  Buch The Priority of Locomotion in Aristotle’s Physics"
The Priority of Locomotion in Aristotle’s Physics