Seite - 98 - in The Priority of Locomotion in Aristotle’s Physics 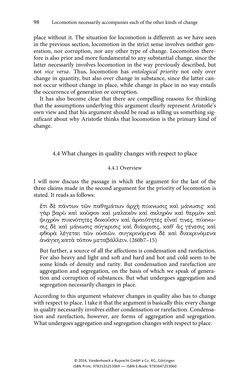 place without it. The situation for locomotion is different: as we have seen in the previous section, locomotion in the strict sense involves neither gen- eration, nor corruption, nor any other type of change. Locomotion there- fore is also prior and more fundamental to any substantial change, since the latter necessarily involves locomotion in the way previously described, but not vice versa. Thus, locomotion has ontological priority not only over change in quantity, but also over change in substance, since the latter can- not occur without change in place, while change in place in no way entails the occurrence of generation or corruption. It has also become clear that there are compelling reasons for thinking that the assumptions underlying this argument clearly represent Aristotle’s own view and that his argument should be read as telling us something sig- nificant about why Aristotle thinks that locomotion is the primary kind of change. 4.4 What changes in quality changes with respect to place 4.4.1 Overview I will now discuss the passage in which the argument for the last of the three claims made in the second argument for the priority of locomotion is stated. It reads as follows: ἔτι δὲ πάντων τῶν παθημάτων ἀρχὴ πύκνωσις καὶ μάνωσις· καὶ γὰρ βαρὺ καὶ κοῦφον καὶ μαλακὸν καὶ σκληρὸν καὶ θερμὸν καὶ ψυχρὸν πυκνότητες δοκοῦσιν καὶ ἀραιότητες εἶναί τινες. πύκνω- σις δὲ καὶ μάνωσις σύγκρισις καὶ διάκρισις, καθ᾽ ἃς γένεσις καὶ φθορὰ λέγεται τῶν οὐσιῶν. συγκρινόμενα δὲ καὶ διακρινόμενα ἀνάγκη κατὰ τόπον μεταβάλλειν. (260b7–15) But further, a source of all the affections is condensation and rarefaction. For also heavy and light and soft and hard and hot and cold seem to be some kinds of density and rarity. But condensation and rarefaction are aggregation and segregation, on the basis of which we speak of genera- tion and corruption of substances. But what undergoes aggregation and segregation necessarily changes in place. According to this argument whatever changes in quality also has to change with respect to place. I take it that the argument is basically this: every change in quality necessarily involves either condensation or rarefaction. Condensa- tion and rarefaction, however, are forms of aggregation and segregation. What undergoes aggregation and segregation changes with respect to place. 98 Locomotion necessarily accompanies each of the other kinds of change ISBN Print: 9783525253069 — ISBN E-Book: 9783647253060 © 2014, Vandenhoeck & Ruprecht GmbH & Co. KG, Göttingen
zurück zum  Buch The Priority of Locomotion in Aristotle’s Physics"
The Priority of Locomotion in Aristotle’s Physics