Seite - 69 - in The Priority of Locomotion in Aristotle’s Physics 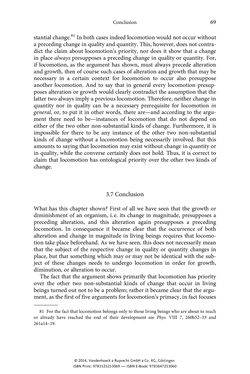 stantial change.81 In both cases indeed locomotion would not occur without a preceding change in quality and quantity. This, however, does not contra- dict the claim about locomotion’s priority, nor does it show that a change in place always presupposes a preceding change in quality or quantity. For, if locomotion, as the argument has shown, must always precede alteration and growth, then of course such cases of alteration and growth that may be necessary in a certain context for locomotion to occur also presuppose another locomotion. And to say that in general every locomotion presup- poses alteration or growth would clearly contradict the assumption that the latter two always imply a previous locomotion. Therefore, neither change in quantity nor in quality can be a necessary prerequisite for locomotion in general, or, to put it in other words, there are—and according to the argu- ment there need to be—instances of locomotion that do not depend on either of the two other non-substantial kinds of change. Furthermore, it is impossible for there to be any instance of the other two non-substantial kinds of change without a locomotion being necessarily involved. But this amounts to saying that locomotion may exist without change in quantity or in quality, while the converse certainly does not hold. Thus, it is correct to claim that locomotion has ontological priority over the other two kinds of change. 3.7 Conclusion What has this chapter shown? First of all we have seen that the growth or diminishment of an organism, i.e. its change in magnitude, presupposes a preceding alteration, and this alteration again presupposes a preceding locomotion. In consequence it became clear that the occurrence of both alteration and change in magnitude in living beings requires that locomo- tion take place beforehand. As we have seen, this does not necessarily mean that the subject of the respective change in quality or quantity changes in place, but that something which may or may not be identical with the sub- ject of these changes needs to undergo locomotion in order for growth, diminution, or alteration to occur. The fact that the argument shows primarily that locomotion has priority over the other two non-substantial kinds of change that occur in living beings turned out not to be a problem; rather it became clear that the argu- ment, as the first of five arguments for locomotion’s primacy, in fact focuses 81 For the fact that locomotion belongs only to those living beings who are about to reach or already have reached the end of their development see Phys. VIII 7, 260b32–33 and 261a14–19. Conclusion 69 ISBN Print: 9783525253069 — ISBN E-Book: 9783647253060 © 2014, Vandenhoeck & Ruprecht GmbH & Co. KG, Göttingen
zurück zum  Buch The Priority of Locomotion in Aristotle’s Physics"
The Priority of Locomotion in Aristotle’s Physics