by Gerhard Murer [1]
Kindly made available by Unternehmen/Anton_Paar_GmbH April 2017, based on an earlier entry in the Paar-Blog

Technology in general and measuring and analytical technology in particular  do not develop in a linear fashion but typically in technological leaps. Using selected measuring instruments as examples it is possible to understand this phenomenon.

Instrumental analytical methods were already known in the 19th century, in particular spectroscopic methods such as those first described by Robert Bunsen and Gustav Kirchhoff. Absorption lines were observed in the light of glowing substances, in sunlight and in the light from stars and this gave insights into their chemical composition. This early analysis equipment was built by hand and served scientific investigations. 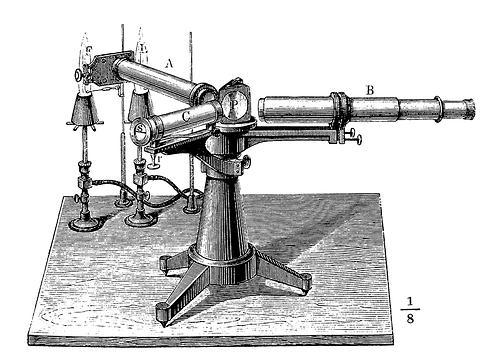 Image 1: Bunsen spectroscope with a prism for spectral decomposition of light

The production of analytical instruments in large numbers and their use outside universities and research institutes began after the Second World War. Anton Paar delivered the first measuring devices for small-angle X-ray scattering (SAXS) in the late 1950s and the first digital DMA density meters were sold in the mid-1960s. 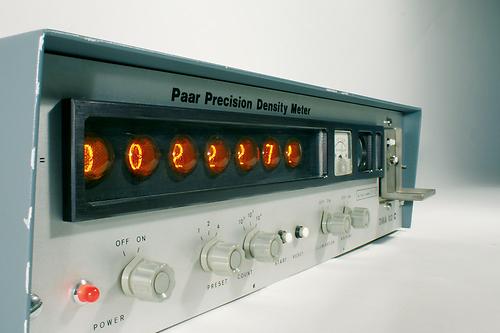 When usability was not an issue#

With these products the focus was on providing a correct measuring result. The convenience and scope of these devices were far removed from what is available from today’s measuring and analytical instruments. There was hardly any control of environmental influences so that the measuring devices had to be operated in temperature-stable rooms and shielded from mechanical vibrations and electromagnetic sources. The first digital DMA density meters only provided one number as the result. This represented the oscillation period. The first SAXS products used X-ray films or one-dimensional analog detectors to create measuring values. It was hard work to convert the output values into the required result. This was sometimes done on paper, sometimes with calculators, which often still worked mechanically, or with mainframe computers.

In the 1970s it became clear that the measuring devices needed to offer more operating convenience and user safety so they could make the breakthrough into industrial research, product development, and quality control. The DMAs were equipped with digital calculating units made of discrete components so that the density or concentration values could be displayed directly and printed out. The tiresome problem of temperature control was solved by integrating electronic thermometers and solid-state Peltier thermostats.

In the 1970s, metrology – the science of “precise and accurate” measurements – began to establish itself. An important customer who used the DMA products then realized that the measuring result was not only dependent on the density of the sample but also on the sample's viscosity. This influence led to measuring errors. The following years were shaped by intense research work in order to eliminate these and other errors.

The first DMA devices which were equipped with microprocessors in the mid-1980s were able to remove this measuring error within a limited viscosity range. The microprocessor also enabled the device to store several conversion formulas so that not only a single result was shown but also concentration calculations could be carried out for different samples. In the field of SAXS the era of the Kratky Compact Camera began. This was more compact and easier to adjust than previous systems.

During this period the first useful PCs became available. This development started a decade-long discussion about whether to develop “unintelligent” measuring devices and place the software intelligence and calculation power in a PC or whether it is better to continue to develop devices which operate without a PC. We took the route without PCs wherever this was possible – and are still happy with our decision.

In the 1990s the viscosity error with the DMA products was completely eliminated. Graphical displays were used with all the new possibilities they offered. In this period we also entered the world of rheology [2] when we acquired Physica Messtechnik GmbH in Stuttgart (later renamed Anton Paar Germany). The then Physica rheometers were equipped with ball bearings while the market-leading products used air bearings allowing significantly more precise measurements. Thus, the development of air-bearing rheometers was also a first important step towards our dominant position on the market and in technology leadership.

At the start of the new millennium, there was the launch of a new SAXS system with X-ray optics which allowed higher beam intensity and therefore delivered significantly improved measuring results. Digital X-ray detectors allowed the signal output directly to a computer. New DMA density meters and rheometers brought improved measurements, larger measuring ranges and additional features such as the normal force measurement in the rheometers. The development of comprehensive software functions, simple graphical user interfaces, and system capability gained more and more importance.

Analytical technologies complementary to density measurement, such as infrared spectroscopy and dissolved carbon dioxide measurements, were worked on and analysis systems were developed. For example: our systems can determine all the relevant quality parameters of beer without sample preparation – which puts us in a dominant position in beverage analysis worldwide. 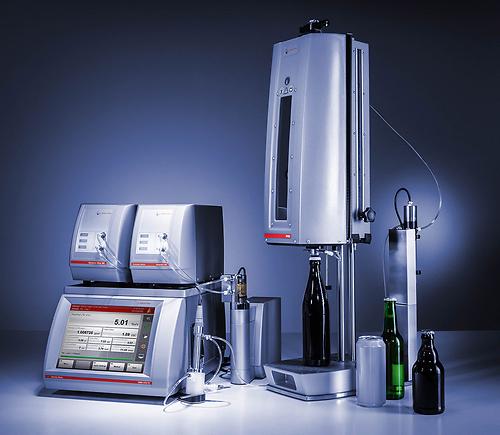 Where to next? Our aim is to further increase the customer benefit of our devices, to continue to improve user-friendliness, and rule out operating errors via instrument intelligence and connectivity. The integration of the measuring instruments into the customer-specific workflow will be seamless and the integration of measuring data will be further simplified. And wherever technologies will be developed in the future – if they increase the customer benefit then we will integrate them into our products and therefore achieve further technological leaps.

[1] Die vorliegende Version wurde am 27. April 2017 mit freundlicher Genehmigung ins Austria-Forum übernommen. Sie basiert auf einem für den Blog von Anton Paar verfassten Artikel vom 10.November 2016 von Gerhard Murer.
[2] A rheometer is used to measure the way in which a liquid or suspension behaves in response to applied forces. It is used for fluids which cannot be defined by a single value of viscosity: It measures the rheology of the fluid.