Seite - 30 - in The Priority of Locomotion in Aristotle’s Physics 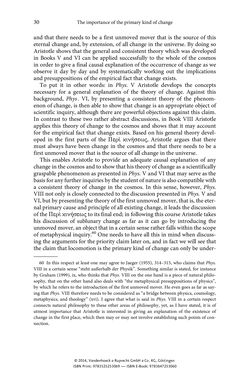 and that there needs to be a first unmoved mover that is the source of this eternal change and, by extension, of all change in the universe. By doing so Aristotle shows that the general and consistent theory which was developed in Books V and VI can be applied successfully to the whole of the cosmos in order to give a final causal explanation of the occurrence of change as we observe it day by day and by systematically working out the implications and presuppositions of the empirical fact that change exists. To put it in other words: in Phys. V Aristotle develops the concepts necessary for a general explanation of the theory of change. Against this background, Phys. VI, by presenting a consistent theory of the phenom- enon of change, is then able to show that change is an appropriate object of scientific inquiry, although there are powerful objections against this claim. In contrast to these two rather abstract discussions, in Book VIII Aristotle applies this theory of change to the cosmos and shows that it may account for the empirical fact that change exists. Based on his general theory devel- oped in the first parts of the Περὶ κινήσεως, Aristotle argues that there must always have been change in the cosmos and that there needs to be a first unmoved mover that is the source of all change in the universe. This enables Aristotle to provide an adequate causal explanation of any change in the cosmos and to show that his theory of change as a scientifically graspable phenomenon as presented in Phys. V and VI that may serve as the basis for any further inquiries by the student of nature is also compatible with a consistent theory of change in the cosmos. In this sense, however, Phys. VIII not only is closely connected to the discussion presented in Phys. V and VI, but by presenting the theory of the first unmoved mover, that is, the eter- nal primary cause and principle of all existing change, it leads the discussion of the Περὶ κινήσεως to its final end; in following this course Aristotle takes his discussion of sublunary change as far as it can go by introducing the unmoved mover, an object that in a certain sense rather falls within the scope of metaphysical inquiry.60 One needs to have all this in mind when discuss- ing the arguments for the priority claim later on, and in fact we will see that the claim that locomotion is the primary kind of change can only be under- 60 In this respect at least one may agree to Jaeger (1955), 314–315, who claims that Phys. VIII in a certain sense “steht außerhalb der Physik”. Something similar is stated, for instance by Graham (1999), ix, who thinks that Phys. VIII on the one hand is a piece of natural philo- sophy, that on the other hand also deals with “the metaphysical presuppositions of physics”, by which he refers to the introduction of the first unmoved mover. He even goes as far as say- ing that Phys. VIII therefore needs to be considered as “a bridge between physics, cosmology, metaphysics, and theology” (xvi). I agree that what is said in Phys. VIII in a certain respect connects natural philosophy to these other areas of philosophy, yet, as I have stated, it is of utmost importance that Aristotle is interested in giving an explanation of the existence of change in the first place, which then may or may not involve establishing such points of con- nection. 30 The importance of the primary kind of change ISBN Print: 9783525253069 — ISBN E-Book: 9783647253060 © 2014, Vandenhoeck & Ruprecht GmbH & Co. KG, Göttingen
zurück zum  Buch The Priority of Locomotion in Aristotle’s Physics"
The Priority of Locomotion in Aristotle’s Physics