Seite - 37 - in The Priority of Locomotion in Aristotle’s Physics 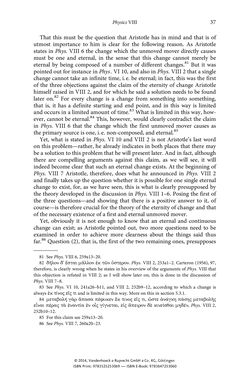 That this must be the question that Aristotle has in mind and that is of utmost importance to him is clear for the following reason. As Aristotle states in Phys. VIII 6 the change which the unmoved mover directly causes must be one and eternal, in the sense that this change cannot merely be eternal by being composed of a number of different changes.81 But it was pointed out for instance in Phys. VI 10, and also in Phys. VIII 2 that a single change cannot take an infinite time, i.e. be eternal; in fact, this was the first of the three objections against the claim of the eternity of change Aristotle himself raised in VIII 2, and for which he said a solution needs to be found later on.82 For every change is a change from something into something, that is, it has a definite starting and end point, and in this way is limited and occurs in a limited amount of time.83 What is limited in this way, how- ever, cannot be eternal.84 This, however, would clearly contradict the claim in Phys. VIII 6 that the change which the first unmoved mover causes as the primary source is one, i.e. non-composed, and eternal.85 Yet, what is stated in Phys. VI 10 and VIII 2 is not Aristotle’s last word on this problem—rather, he already indicates in both places that there may be a solution to this problem that he will present later. And in fact, although there are compelling arguments against this claim, as we will see, it will indeed become clear that such an eternal change exists. At the beginning of Phys. VIII 7 Aristotle, therefore, does what he announced in Phys. VIII 2 and finally takes up the question whether it is possible for one single eternal change to exist, for, as we have seen, this is what is clearly presupposed by the theory developed in the discussion in Phys. VIII 1–6. Posing the first of the three questions—and showing that there is a positive answer to it, of course—is therefore crucial for the theory of the eternity of change and that of the necessary existence of a first and eternal unmoved mover. Yet, obviously it is not enough to know that an eternal and continuous change can exist; as Aristotle pointed out, two more questions need to be examined in order to achieve more clearness about the things said thus far.86 Question (2), that is, the first of the two remaining ones, presupposes 81 See Phys. VIII 6, 259a13–20. 82 δῆλον δ᾽ ἔσται μᾶλλον ἐκ τῶν ὕστερον. Phys. VIII 2, 253a1–2. Carteron (1956), 97, therefore, is clearly wrong when he states in his overview of the arguments of Phys. VIII that this objection is refuted in VIII 2; as I will show later on, this is done in the discussion of Phys. VIII 7–8. 83 See Phys. VI 10, 241a26–b11, and VIII 2, 252b9–12, according to which a change is always ἐκ τίνος εἴς τι and is limited in this way. More on this in section 5.3.1. 84 μεταβολή γὰρ ἅπασα πέφυκεν ἔκ τινος εἴς τι, ὥστε ἀνάγκη πάσης μεταβολῆς εἶναι πέρας τὰ ἐναντία ἐν οἷς γίγνεται, εἰς ἄπειρον δὲ κινεῖσθαι μηδέν, Phys. VIII 2, 252b10–12. 85 For this claim see 259a13–20. 86 See Phys. VIII 7, 260a20–23. Physics VIII 37 ISBN Print: 9783525253069 — ISBN E-Book: 9783647253060 © 2014, Vandenhoeck & Ruprecht GmbH & Co. KG, Göttingen
zurück zum  Buch The Priority of Locomotion in Aristotle’s Physics"
The Priority of Locomotion in Aristotle’s Physics