Seite - 75 - in The Priority of Locomotion in Aristotle’s Physics 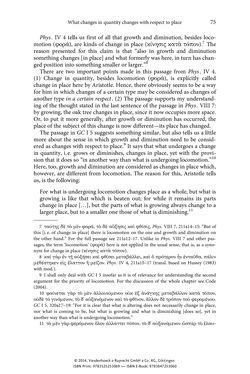 Phys. IV 4 tells us first of all that growth and diminution, besides loco- motion (φoρά), are kinds of change in place (κίνησις κατὰ τόπον).7 The reason presented for this claim is that “also in growth and diminution something changes [in place] and what formerly was here, in turn has chan- ged position into something smaller or larger.”8 There are two important points made in this passage from Phys. IV 4. (1) Change in quantity, besides locomotion (φορά), is explicitly called change in place here by Aristotle. Hence, there obviously seems to be a way for him in which changes of a certain type may be considered as changes of another type in a certain respect. (2) The passage supports my understand- ing of the thought stated in the last sentence of the passage in Phys. VIII 7: by growing, the oak tree changes in place, since it now occupies more space. Or, to put it more generally, after growth or diminution has occurred, the place of the subject of this change is now different—its place has changed. The passage in GC I 5 suggests something similar, but also tells us a little more about the sense in which growth and diminution need to be consid- ered as changes with respect to place.9 It says that what undergoes a change in quantity, i.e. grows or diminishes, changes in place, yet with the provi- sion that it does so “in another way than what is undergoing locomotion.”10 Here, too, growth and diminution are considered as changes in place which, however, are different from locomotion. The reason for this, Aristotle tells us, is the following: For what is undergoing locomotion changes place as a whole, but what is growing is like that which is beaten out; for while it remains its parts change in place […], but the parts of what is growing always change to a larger place, but to a smaller one those of what is diminishing.11 7 ταύτης δὲ τὸ μὲν φορά, τὸ δὲ αὔξησις καὶ φθίσις, Phys. VIII 7, 211a14–15: “But of this [i.e. of change in place] there is locomotion on the one and growth and diminution on the other hand.” For the full passage see 211a12–17. Unlike in Phys. VIII 7 and other pas- sages, the term ‘locomotion’ (φορά) here is not applied in the usual sense, that is, as a syno- nym for change in place (κίνησις κατὰ τόπον). 8 καὶ γὰρ ἐν τῇ αὐξήσει καὶ φθίσει μεταβάλλει, καὶ ὃ πρότερον ἦν ἐνταῦθα, πάλιν μεθέστηκεν εἰς ἔλαττον ἢ μεῖζον. Phys. IV 4, 211a15–17 (transl. based on Hussey (1983) with mod.). 9 I shall only deal with GC I 5 insofar as it is of relevance for understanding the second argument for the priority of locomotion. For the discussion of the whole chapter see Code (2004). 10 φαίνεται γὰρ τὸ μὲν ἀλλοιούμενον οὐκ ἐξ ἀνάγκης μεταβάλλον κατὰ τόπον, οὐδὲ τὸ γινόμενον, τὸ δ᾽ αὐξανόμενον καὶ τὸ φθῖνον, ἄλλον δὲ τρόπον τοῦ φερομένου. GC I 5, 320a17–19: “For it is clear that what is altering does not necessarily change in place, nor what is coming to be, but what is growing and what is diminishing [does so], yet in another way than what is undergoing locomotion.” 11 τὸ μὲν γὰρ φερόμενον ὅλον ἀλλάττει τόπον, τὸ δ᾽ αὐξανόμενον ὥσπερ τὸ ἐλαυ- What changes in quantity changes with respect to place 75 ISBN Print: 9783525253069 — ISBN E-Book: 9783647253060 © 2014, Vandenhoeck & Ruprecht GmbH & Co. KG, Göttingen
zurück zum  Buch The Priority of Locomotion in Aristotle’s Physics"
The Priority of Locomotion in Aristotle’s Physics