Seite - 133 - in The Priority of Locomotion in Aristotle’s Physics 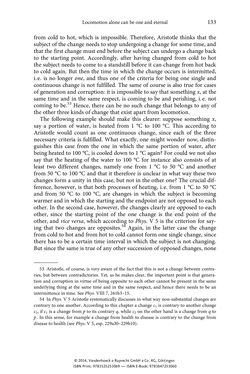 from cold to hot, which is impossible. Therefore, Aristotle thinks that the subject of the change needs to stop undergoing a change for some time, and that the first change must end before the subject can undergo a change back to the starting point. Accordingly, after having changed from cold to hot the subject needs to come to a standstill before it can change from hot back to cold again. But then the time in which the change occurs is intermitted, i.e. is no longer one, and thus one of the criteria for being one single and continuous change is not fulfilled. The same of course is also true for cases of generation and corruption: it is impossible to say that something x, at the same time and in the same respect, is coming to be and perishing, i.e. not coming to be.53 Hence, there can be no such change that belongs to any of the other three kinds of change that exist apart from locomotion. The following example should make this clearer: suppose something x, say a portion of water, is heated from 1 °C to 100 °C. This according to Aristotle would count as one continuous change, since each of the three necessary criteria is fulfilled. What exactly, one might wonder now, distin- guishes this case from the one in which the same portion of water, after being heated to 100 °C, is cooled down to 1 °C again? For could we not also say that the heating of the water to 100 °C for instance also consists of at least two different changes, namely one from 1 °C to 50 °C and another from 50 °C to 100 °C and that it therefore is unclear in what way these two changes form a unity in this case, but not in the other one? The crucial dif- ference, however, is that both processes of heating, i.e. from 1 °C to 50 °C and from 50 °C to 100 °C, are changes in which the subject is becoming warmer and in which the starting and the endpoint are not opposed to each other. In the second case, however, the changes clearly are opposed to each other, since the starting point of the one change is the end point of the other, and vice versa, which according to Phys. V 5 is the criterion for say- ing that two changes are opposites.54 Again, in the latter case the change from cold to hot and from hot to cold cannot form one single change, since there has to be a certain time interval in which the subject is not changing. But since the same is true of any other succession of opposed changes, none 53 Aristotle, of course, is very aware of the fact that this is not a change between contra- ries, but between contradictories. Yet, as he makes clear, the important point is that genera- tion and corruption in virtue of being opposite to each other cannot be present in the same underlying thing at the same time and in the same respect, and hence there needs to be an intermittence in time. See Phys. VIII 7, 261b3–15. 54 In Phys. V 5 Aristotle systematically discusses in what way non-substantial changes are contrary to one another. According to this chapter a change c1 is contrary to another change c2, if c1 is a change from p to its contrary q, while c2 on the other hand is a change from q to p. In this sense, for example a change from health to disease is contrary to the change from disease to health (see Phys. V 5, esp. 229a30–229b10). Locomotion alone can be one and eternal 133 ISBN Print: 9783525253069 — ISBN E-Book: 9783647253060 © 2014, Vandenhoeck & Ruprecht GmbH & Co. KG, Göttingen
zurück zum  Buch The Priority of Locomotion in Aristotle’s Physics"
The Priority of Locomotion in Aristotle’s Physics