Seite - 136 - in The Priority of Locomotion in Aristotle’s Physics 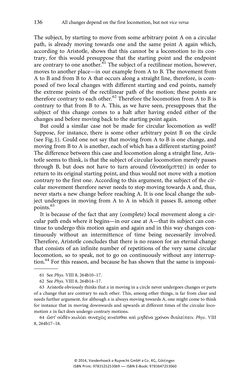 The subject, by starting to move from some arbitrary point A on a circular path, is already moving towards one and the same point A again which, according to Aristotle, shows that this cannot be a locomotion to its con- trary, for this would presuppose that the starting point and the endpoint are contrary to one another.61 The subject of a rectilinear motion, however, moves to another place—in our example from A to B. The movement from A to B and from B to A that occurs along a straight line, therefore, is com- posed of two local changes with different starting and end points, namely the extreme points of the rectilinear path of the motion; these points are therefore contrary to each other.62 Therefore the locomotion from A to B is contrary to that from B to A. This, as we have seen, presupposes that the subject of this change comes to a halt after having ended either of the changes and before moving back to the starting point again. But could a similar case not be made for circular locomotion as well? Suppose, for instance, there is some other arbitrary point B on the circle (see Fig.1). Could one not say that moving from A to B is one change, and moving from B to A is another, each of which has a different starting point? The difference between this case and locomotion along a straight line, Aris- totle seems to think, is that the subject of circular locomotion merely passes through B, but does not have to turn around (ἀνακάμπτει) in order to return to its original starting point, and thus would not move with a motion contrary to the first one. According to this argument, the subject of the cir- cular movement therefore never needs to stop moving towards A and, thus, never starts a new change before reaching A. It is one local change the sub- ject undergoes in moving from A to A in which it passes B, among other points.63 It is because of the fact that any (complete) local movement along a cir- cular path ends where it begins—in our case at A—that its subject can con- tinue to undergo this motion again and again and in this way changes con- tinuously without an intermittence of time being necessarily involved. Therefore, Aristotle concludes that there is no reason for an eternal change that consists of an infinite number of repetitions of the very same circular locomotion, so to speak, not to go on continuously without any interrup- tion.64 For this reason, and because he has shown that the same is impossi- 61 See Phys. VIII 8, 264b10–17. 62 See Phys. VIII 8, 264b14–17. 63 Aristotle obviously thinks that x in moving in a circle never undergoes changes or parts of a change that are contrary to each other. This, among other things, is far from clear and needs further argument, for although x is always moving towards A, one might come to think for instance that in moving downwards and upwards at different times of the circular loco- motion x in fact does undergo contrary motions. 64 ὥστ᾽ οὐδὲν κωλύει συνεχῶς κινεῖσθαι καὶ μηδένα χρόνον διαλείπειν. Phys. VIII 8, 264b17–18. 136 All changes depend on the first locomotion, but not vice versa ISBN Print: 9783525253069 — ISBN E-Book: 9783647253060 © 2014, Vandenhoeck & Ruprecht GmbH & Co. KG, Göttingen
zurück zum  Buch The Priority of Locomotion in Aristotle’s Physics"
The Priority of Locomotion in Aristotle’s Physics