Seite - 158 - in The Priority of Locomotion in Aristotle’s Physics 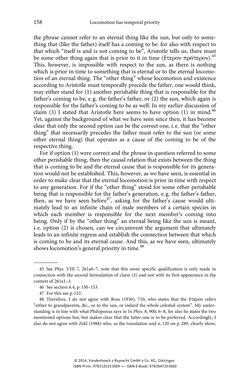 the phrase cannot refer to an eternal thing like the sun, but only to some- thing that (like the father) itself has a coming to be: for also with respect to that which “itself is and is not coming to be”, Aristotle tells us, there must be some other thing again that is prior to it in time (ἕτερον πρότερον).45 This, however, is impossible with respect to the sun, as there is nothing which is prior in time to something that is eternal or to the eternal locomo- tion of an eternal thing. The “other thing” whose locomotion and existence according to Aristotle must temporally precede the father, one would think, may either stand for (1) another perishable thing that is responsible for the father’s coming to be, e.g. the father’s father, or (2) the sun, which again is responsible for the father’s coming to be as well. In my earlier discussion of claim (3) I stated that Aristotle here seems to have option (1) in mind.46 Yet, against the background of what we have seen since then, it has become clear that only the second option can be the correct one, i.e. that the “other thing” that necessarily precedes the father must refer to the sun (or some other eternal thing) that operates as a cause of the coming to be of the respective thing. For if option (1) were correct and the phrase in question referred to some other perishable thing, then the causal relation that exists between the thing that is coming to be and the eternal cause that is responsible for its genera- tion would not be established. This, however, as we have seen, is essential in order to make clear that the eternal locomotion is prior in time with respect to any generation. For if the “other thing” stood for some other perishable being that is responsible for the father’s generation, e.g. the father’s father, then, as we have seen before47, asking for the father’s cause would ulti- mately lead to an infinite chain of male members of a certain species in which each member is responsible for the next member’s coming into being. Only if by the “other thing” an eternal being like the sun is meant, i.e. option (2) is chosen, can we circumvent the argument that ultimately leads to an infinite regress and establish the connection between that which is coming to be and its eternal cause. And this, as we have seen, ultimately shows locomotion’s general priority in time.48 45 See Phys. VIII 7, 261a6–7, note that this more specific qualification is only made in connection with the second formulation of claim (3) and not with its first appearance in the context of 261a1–3. 46 See section 6.4, p.150–153. 47 For this see p.152. 48 Therefore, I do not agree with Ross (1936), 710, who states that the ἕτερον refers “either to grandparents, &c., or to the sun, or indeed the whole celestial system”. My under- standing is in line with what Philoponus says in In Phys. 8, 900, 6–8, for also he states the two mentioned options but, but makes clear that the latter one is to be preferred. Accordingly, I also do not agree with Zekl (1988) who, as the translation and n.120 on p.289, clearly show, 158 Locomotion has temporal priority ISBN Print: 9783525253069 — ISBN E-Book: 9783647253060 © 2014, Vandenhoeck & Ruprecht GmbH & Co. KG, Göttingen
zurück zum  Buch The Priority of Locomotion in Aristotle’s Physics"
The Priority of Locomotion in Aristotle’s Physics