Seite - 189 - in The Priority of Locomotion in Aristotle’s Physics 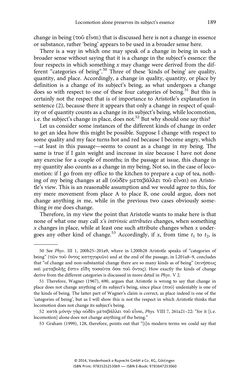 change in being (τοῦ εἶναι) that is discussed here is not a change in essence or substance, rather ‘being’ appears to be used in a broader sense here. There is a way in which one may speak of a change in being in such a broader sense without saying that it is a change in the subject’s essence: the four respects in which something x may change were derived from the dif- ferent “categories of being”.50 Three of these ‘kinds of being’ are quality, quantity, and place. Accordingly, a change in quality, quantity, or place by definition is a change of its subject’s being, as what undergoes a change does so with respect to one of these four categories of being.51 But this is certainly not the respect that is of importance to Aristotle’s explanation in sentence (2), because there it appears that only a change in respect of qual- ity or of quantity counts as a change in its subject’s being, while locomotion, i.e. the subject’s change in place, does not.52 But why should one say this? Let us consider some instances of the different kinds of change in order to get an idea how this might be possible. Suppose I change with respect to some quality and my face turns hot and red because I become angry, which —at least in this passage—seems to count as a change in my being. The same is true if I gain weight and increase in size because I have not done any exercise for a couple of months; in the passage at issue, this change in my quantity also counts as a change in my being. Not so, in the case of loco- motion: if I go from my office to the kitchen to prepare a cup of tea, noth- ing of my being changes at all (οὐδὲν μεταβάλλει τοῦ εἶναι) on Aristo- tle’s view. This is an reasonable assumption and we would agree to this, for my mere movement from place A to place B, one could argue, does not change anything in me, while in the previous two cases obviously some- thing in me does change. Therefore, in my view the point that Aristotle wants to make here is that none of what one may call x’s intrinsic attributes changes, when something x changes in place, while at least one such attribute changes when x under- goes any other kind of change.53 Accordingly, if x, from time t1 to t2, is 50 See Phys. III 1, 200b25–201a9, where in l.200b28 Aristotle speaks of “categories of being” (τῶν τοῦ ὄντος κατηγοριῶν) and at the end of the passage, in l.201a8–9, concludes that “of change and non-substantial change there are so many kinds as of being” (κινήσεως καὶ μεταβολῆς ἔστιν εἴδη τοσαῦτα ὅσα τοῦ ὄντος). How exactly the kinds of change derive from the different categories is discussed in more detail in Phys. V 2. 51 Therefore, Wagner (1967), 690, argues that Aristotle is wrong to say that change in place does not change anything of its subject’s being, since place (πού) undeniably is one of the kinds of being. The latter part of Wagner’s claim is correct, as place indeed is one of the ‘categories of being’, but as I will show this is not the respect in which Aristotle thinks that locomotion does not change its subject’s being. 52 κατὰ μόνην γὰρ οὐδὲν μεταβάλλει τοῦ εἶναι, Phys. VIII 7, 261a21–22: “for it [i.e. locomotion] alone does not change anything of the being.” 53 Graham (1999), 128, therefore, points out that “[i]n modern terms we could say that Locomotion alone preserves its subject’s essence 189 ISBN Print: 9783525253069 — ISBN E-Book: 9783647253060 © 2014, Vandenhoeck & Ruprecht GmbH & Co. KG, Göttingen
zurück zum  Buch The Priority of Locomotion in Aristotle’s Physics"
The Priority of Locomotion in Aristotle’s Physics