Page - 190 - in Jacopo Strada and Cultural Patronage at the Imperial Court - The Antique as Innovation, Volume 1 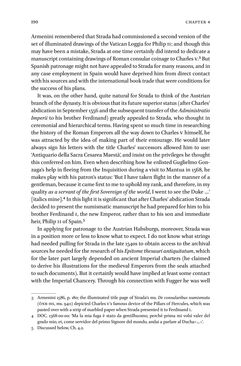 Chapter 4190 Armenini remembered that Strada had commissioned a second version of the set of illuminated drawings of the Vatican Loggia for Philip ii; and though this may have been a mistake, Strada at one time certainly did intend to dedicate a manuscript containing drawings of Roman consular coinage to Charles v.3 But Spanish patronage might not have appealed to Strada for many reasons, and in any case employment in Spain would have deprived him from direct contact with his sources and with the international book trade that were conditions for the success of his plans. It was, on the other hand, quite natural for Strada to think of the Austrian branch of the dynasty. It is obvious that its future superior status (after Charles’ abdication in September 1556 and the subsequent transfer of the Administratio Imperii to his brother Ferdinand) greatly appealed to Strada, who thought in ceremonial and hierarchical terms. Having spent so much time in researching the history of the Roman Emperors all the way down to Charles v himself, he was attracted by the idea of making part of their entourage. He would later always sign his letters with the title Charles’ successors allowed him to use: ‘Antiquario della Sacra Cesarea Maestà’, and insist on the privileges he thought this conferred on him. Even when describing how he enlisted Guglielmo Gon- zaga’s help in fleeing from the Inquisition during a visit to Mantua in 1568, he makes play with his patron’s status: ‘But I have taken flight in the manner of a gentleman, because it came first to me to uphold my rank, and therefore, in my quality as a servant of the first Sovereign of the world, I went to see the Duke …’ [italics mine].4 In this light it is significant that after Charles’ abdication Strada decided to present the numismatic manuscript he had prepared for him to his brother Ferdinand i, the new Emperor, rather than to his son and immediate heir, Philip ii of Spain.5 In applying for patronage to the Austrian Habsburgs, moreover, Strada was in a position more or less to know what to expect. I do not know what strings had needed pulling for Strada in the late 1540s to obtain access to the archival sources he needed for the research of his Epitome thesauri antiquitatum, which for the later part largely depended on ancient Imperial charters (he claimed to derive his illustrations for the medieval Emperors from the seals attached to such documents). But it certainly would have implied at least some contact with the Imperial Chancery. Through his connection with Fugger he was well 3 Armenini 1586, p. 180; the illuminated title page of Strada’s ms. De consularibus numismata (önb-hs, ms. 9411) depicted Charles v’s famous device of the Pillars of Hercules, which was pasted over with a strip of marbled paper when Strada presented it to Ferdinand i. 4 DOC. 1568-00-00: ‘Ma la mia fuga è stato da gentilhuomo, perchè prima mi volsi valer del grado mio, et, come servidor del primo Signore del mondo, andai a parlare al Ducha<...>’. 5 Discussed below, Ch. 4.2.
back to the  book Jacopo Strada and Cultural Patronage at the Imperial Court - The Antique as Innovation, Volume 1"
Jacopo Strada and Cultural Patronage at the Imperial Court The Antique as Innovation, Volume 1