Page - 327 - in Jacopo Strada and Cultural Patronage at the Imperial Court - The Antique as Innovation, Volume 1 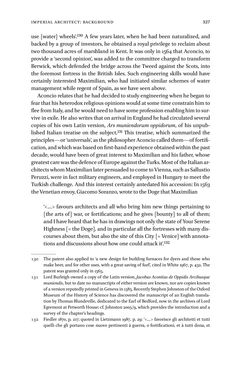 327Imperial Architect: Background 130 The patent also applied to ‘a new design for building furnaces for dyers and those who make beer, and for other uses, with a great saving of fuel’, cited in White 1967, p. 432. The patent was granted only in 1565. 131 Lord Burleigh owned a copy of the Latin version, Jacobus Acontius de Oppidis Arcibusque muniendis, but to date no manuscripts of either version are known, nor are copies known of a version reputedly printed in Geneva in 1585. Recently Stephen Johnston of the Oxford Museum of the History of Science has discovered the manuscript of an English transla- tion by Thomas Blundeville, dedicated to the Earl of Bedford, now in the archives of Lord Egremont at Petworth House; cf. Johnston 2005/9, which provides the introduction and a survey of the chapter’s headings. 132 Fiedler 1870, p. 217; quoted in Lietzmann 1987, p. 29: ‘<…> favorisce gli architetti et tutti quelli che gli portano cose nuove pertinenti à guerra, o fortificationi, et à tutti dona, et use [water] wheels’.130 A few years later, when he had been naturalized, and backed by a group of investors, he obtained a royal privilege to reclaim about two thousand acres of marshland in Kent. It was only in 1564 that Aconcio, to provide a ‘second opinion’, was added to the committee charged to transform Berwick, which defended the bridge across the Tweed against the Scots, into the foremost fortress in the British Isles. Such engineering skills would have certainly interested Maximilian, who had initiated similar schemes of water management while regent of Spain, as we have seen above. Aconcio relates that he had decided to study engineering when he began to fear that his heterodox religious opinions would at some time constrain him to flee from Italy, and he would need to have some profession enabling him to sur- vive in exile. He also writes that on arrival in England he had circulated several copies of his own Latin version, Ars muniendorum oppidorum, of his unpub- lished Italian treatise on the subject.131 This treatise, which summarized the principles—or ‘universals’, as the philosopher Aconcio called them—of fortifi- cation, and which was based on first-hand experience obtained within the past decade, would have been of great interest to Maximilian and his father, whose greatest care was the defence of Europe against the Turks. Most of the Italian ar- chitects whom Maximilian later persuaded to come to Vienna, such as Sallustio Peruzzi, were in fact military engineers, and employed in Hungary to meet the Turkish challenge. And this interest certainly antedated his accession: In 1563 the Venetian envoy, Giacomo Soranzo, wrote to the Doge that Maximilian ‘<…> favours architects and all who bring him new things pertaining to [the arts of] war, or fortifications; and he gives [bounty] to all of them; and I have heard that he has in drawings not only the state of Your Serene Highness [= the Doge], and in particular all the fortresses with many dis- courses about them, but also the site of this City [= Venice] with annota- tions and discussions about how one could attack it’.132
back to the  book Jacopo Strada and Cultural Patronage at the Imperial Court - The Antique as Innovation, Volume 1"
Jacopo Strada and Cultural Patronage at the Imperial Court The Antique as Innovation, Volume 1