The Very Basics Of Density Measurement#

This contribution gives an overview of all the different density measuring methods known and what they can – or can’t – do for us.

Density measurement has a long history – it actually dates back 2200 years to the times of King Hieron II of Syracuse. In a nutshell, King Hieron II had a crown made of pure gold. The goldsmith was accused of having added some silver to the crown. Archimedes, a great mathematician, physicist, engineer, inventor and astronomer, was asked to prove – or debunk – that Hieron’s crown consisted of nothing but gold, without destroying it.

Archimedes went home to think about the problem. Exhausted from all the pondering over this difficult task, he took a bath. (Okay, this part of the story is made up but read on to see what he found.) When he sank into a very full bathtub, it started to overflow. He realized that the overflowing water stood in direct relation to the immersion of his body volume into the water. We all know what he did next: he ran across town – naked – yelling: ‘Eureka!’ [I found it!].

In order to verify the gold content of King Hieron’s crown, he took the crown and a bar of pure gold of the exact same weight as the crown. He immersed both objects in a water container. The crown displaced more water than the gold bar, the water went up higher – so the crown obviously had more volume. The same mass, but more volume – means lower average density. The crown was less dense than pure gold, so it had to be stretched with another metal.

This experiment helped Archimedes discover the relation of mass to volume. And it leads to some of the main questions we need answers for in working with gases, solids and liquids:

Which measuring methods are available?#

The tremendous diversity of density measurement applications called for ever better methods for determining mass per volume (or density) in order to measure density faster, with higher precision, less sample volume required or at other defined temperatures besides ‘room temperature’.

A hydrometer is based on the relation of buoyancy to density. It is a floating glass body with a cylindrical stem and a bulb filled with a metal weight. Depending on how deep it sinks in the sample, the density can be read directly from a scale on the upper part. The deeper it sinks, the less dense the substance is. If we immersed the hydrometer in a glass of water, it would sink deeper than in a glass of syrup, where it would float higher. 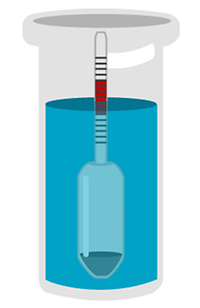 Hydrometers are fast, simple and affordable. They break quite easily and require a large sample volume. Due to the small size of a hydrometer’s scale, results can easily be misread. Thermostatting is quite complicated (but needed for measurements at a specified temperature).

A pycnometer is a glass flask of a known weight. To determine its exact volume it is filled with a calibration liquid (e.g. water) of a known density. By weighing the contained water, one can calculate the exact volume as the water’s density is a factor we know. In a third step, a simple calculation provides information about the exact volume (volume = weight / density). When determining the unknown density of a sample afterwards, the same formula is just used in a different way (density = weight / volume). 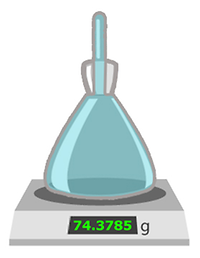 Pycnometers are affordable and highly accurate. Unfortunately, these instruments also break easily, like hydrometers. Besides requiring a large sample volume and a skilled operator for this rather complicated procedure, the method is quite slow and time consuming. Thermostatting is quite a challenge and a highly precise balance is needed for reliable results.

A hydrostatic balance is a very precise balance with a sinker (a sphere, for example) of exactly known volume attached to one of the scale pans.

The sinker is immersed in the sample, after which the apparent weight loss of the sinker is determined – it is actually being weighed out. With Archimedes and his bathtub discovery in mind, the apparent weight loss of the sinker (Archimedes stepping into the tub) is equal to the weight of the fluid it displaces (the water flowing over the tub). Hence, the precise volume and precise weight are known. 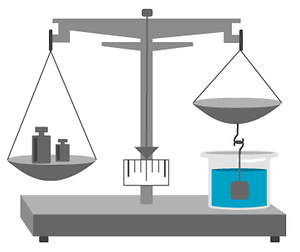 Hydrostatic balances are highly reliable and precise. However, with all the required machinery (e.g. A/C) they are bigger than the human operator and – understandably – expensive. It is quite a challenge to install one and measuring takes a lot of time. Establishing temperature control / insulation is only possible by means of highly sophisticated air conditioning.

A modern digital density meter – based on the U-tube principle – measures the inertial mass of a known sample volume. The sample is filled into a U-shaped tube that is mounted on a countermass. The U-tube is then excited and starts to oscillate. Depending on the filled-in sample, the characteristic frequency of the oscillating tube differs. The change in frequency is measured and the density can be determined. High frequency can thus be related to low density and vice versa. 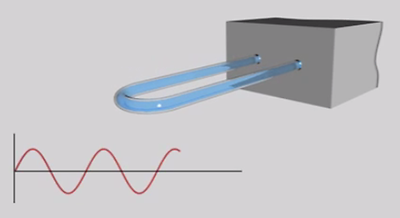 What does this mean for us?#

Benjamin Franklin knew what he was talking about when he said that “time is money.” Obviously, the less attention a method requires from the operator, the better this person can focus on other tasks. To save a lab technician time, it is therefore quite useful to provide a measuring method that can be automated as much as possible while keeping the possible sources of error and negative influences on the measurement at a minimum.

At Anton Paar the latest milestone in the evolution of density measurement unites all important aspects of modern density measurement: speed, accuracy, reliability, repeatability and modern user interaction. The DMA Generation M, we can provide three models of easily operated digital density meters with different levels of accuracy. For more details on density and how to excel at measuring it, please consult www.good-density-measurement.com.

For interested person or groups Anton Paar is happy to answer questions and even arrange a tour for a group, if desired. Feel free to get in touch!