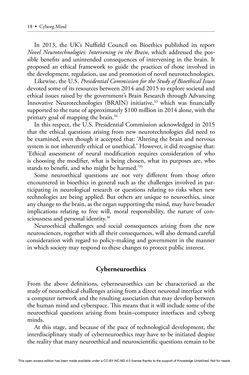 18 • Cyborg Mind In 2013, the UK’s Nuffield Council on Bioethics published its report Novel Neurotechnologies: Intervening in the Brain, which addressed the pos- sible benefits and unintended consequences of intervening in the brain. It proposed an ethical framework to guide the practices of those involved in the development, regulation, use and promotion of novel neurotechnologies. Likewise, the U.S. Presidential Commission for the Study of Bioethical Issues devoted some of its resources between 2014 and 2015 to explore societal and ethical issues raised by the government’s Brain Research through Advancing Innovative Neurotechnologies (BRAIN) initiative,33 which was financially supported to the tune of approximately $100 million in 2014 alone, with the primary goal of mapping the brain.34 In this respect, the U.S. Presidential Commission acknowledged in 2015 that the ethical questions arising from new neurotechnologies did need to be examined, even though it accepted that: ‘Altering the brain and nervous system is not inherently ethical or unethical.’ However, it did recognise that: ‘Ethical assessment of neural modification requires consideration of who is choosing the modifier, what is being chosen, what its purposes are, who stands to benefit, and who might be harmed.’35 Some neuroethical questions are not very different from those often encountered in bioethics in general such as the challenges involved in par- ticipating in neurological research or questions relating to risks when new technologies are being applied. But others are unique to neuroethics, since any change to the brain, as the organ supporting the mind, may have broader implications relating to free will, moral responsibility, the nature of con- sciousness and personal identity.36 Neuroethical challenges and social consequences arising from the new neurosciences, together with all their consequences, will also demand careful consideration with regard to policy-making and government in the manner in which society may respond to these changes to protect public interest. Cyberneuroethics From the above definitions, cyberneuroethics can be characterised as the study of neuroethical challenges arising from a direct neuronal interface with a computer network and the resulting association that may develop between the human mind and cyberspace. This means that it will include some of the neuroethical questions arising from brain–computer interfaces and cyborg minds. At this stage, and because of the pace of technological development, the interdisciplinary study of cyberneuroethics may have to be initiated despite the reality that many neuroethical and neuroscientific questions remain to be This open access edition has been made available under a CC-BY-NC-ND 4.0 license thanks to the support of Knowledge Unlatched. Not for resale.
zurück zum  Buch Cyborg Mind - What Brain–Computer and Mind–Cyberspace Interfaces Mean for Cyberneuroethics"
Cyborg Mind What Brain–Computer and Mind–Cyberspace Interfaces Mean for Cyberneuroethics