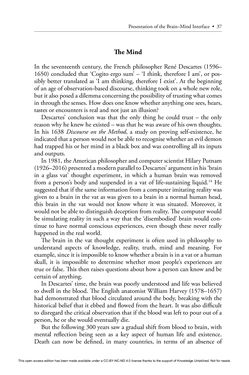 Presentation of the Brain–Mind Interface • 37 The Mind In the seventeenth century, the French philosopher René Descartes (1596– 1650) concluded that ‘Cogito ergo sum’  – ‘I think, therefore I am’, or pos- sibly better translated as ‘I am thinking, therefore I exist’. At the beginning of an age of observation-based discourse, thinking took on a whole new role, but it also posed a dilemma concerning the possibility of trusting what comes in through the senses. How does one know whether anything one sees, hears, tastes or encounters is real and not just an illusion? Descartes’ conclusion was that the only thing he could trust  – the only reason why he knew he existed  – was that he was aware of his own thoughts. In his 1638 Discourse on the Method, a study on proving self-existence, he indicated that a person would not be able to recognise whether an evil demon had trapped his or her mind in a black box and was controlling all its inputs and outputs. In 1981, the American philosopher and computer scientist Hilary Putnam (1926–2016) presented a modern parallel to Descartes’ argument in his ‘brain in a glass vat’ thought experiment, in which a human brain was removed from a person’s body and suspended in a vat of life-sustaining liquid.14 He suggested that if the same information from a computer imitating reality was given to a brain in the vat as was given to a brain in a normal human head, this brain in the vat would not know where it was situated. Moreover, it would not be able to distinguish deception from reality. The computer would be simulating reality in such a way that the ‘disembodied’ brain would con- tinue to have normal conscious experiences, even though these never really happened in the real world. The brain in the vat thought experiment is often used in philosophy to understand aspects of knowledge, reality, truth, mind and meaning. For example, since it is impossible to know whether a brain is in a vat or a human skull, it is impossible to determine whether most people’s experiences are true or false. This then raises questions about how a person can know and be certain of anything. In Descartes’ time, the brain was poorly understood and life was believed to dwell in the blood. The English anatomist William Harvey (1578–1657) had demonstrated that blood circulated around the body, breaking with the historical belief that it ebbed and flowed from the heart. It was also difficult to disregard the critical observation that if the blood was left to pour out of a person, he or she would eventually die. But the following 300 years saw a gradual shift from blood to brain, with mental reflection being seen as a key aspect of human life and existence. Death can now be defined, in many countries, in terms of an absence of This open access edition has been made available under a CC-BY-NC-ND 4.0 license thanks to the support of Knowledge Unlatched. Not for resale.
zurück zum  Buch Cyborg Mind - What Brain–Computer and Mind–Cyberspace Interfaces Mean for Cyberneuroethics"
Cyborg Mind What Brain–Computer and Mind–Cyberspace Interfaces Mean for Cyberneuroethics