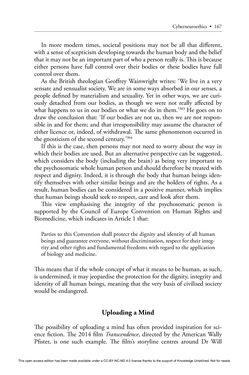 Cyberneuroethics • 167 In more modern times, societal positions may not be all that different, with a sense of scepticism developing towards the human body and the belief that it may not be an important part of who a person really is. This is because either persons have full control over their bodies or these bodies have full control over them. As the British theologian Geoffrey Wainwright writes: ‘We live in a very sensate and sensualist society. We are in some ways absorbed in our senses, a people defined by materialism and sexuality. Yet in other ways, we are curi- ously detached from our bodies, as though we were not really affected by what happens to us in our bodies or what we do in them.’303 He goes on to draw the conclusion that: ‘If our bodies are not us, then we are not respon- sible in and for them; and that irresponsibility may assume the character of either licence or, indeed, of withdrawal. The same phenomenon occurred in the gnosticism of the second century.’304 If this is the case, then persons may not need to worry about the way in which their bodies are used. But an alternative perspective can be suggested, which considers the body (including the brain) as being very important to the psychosomatic whole human person and should therefore be treated with respect and dignity. Indeed, it is through the body that human beings iden- tify themselves with other similar beings and are the holders of rights. As a result, human bodies can be considered in a positive manner, which implies that human beings should seek to respect, care and look after them. This view emphasising the integrity of the psychosomatic person is supported by the Council of Europe Convention on Human Rights and Biomedicine, which indicates in Article 1 that: Parties to this Convention shall protect the dignity and identity of all human beings and guarantee everyone, without discrimination, respect for their integ- rity and other rights and fundamental freedoms with regard to the application of biology and medicine. This means that if the whole concept of what it means to be human, as such, is undermined, it may jeopardise the protection for the dignity, integrity and identity of all human beings, meaning that the very basis of civilised society would be endangered. Uploading a Mind The possibility of uploading a mind has often provided inspiration for sci- ence fiction. The 2014 film Transcendence, directed by the American Wally Pfister, is one such example. The film’s storyline centres around Dr Will This open access edition has been made available under a CC-BY-NC-ND 4.0 license thanks to the support of Knowledge Unlatched. Not for resale.
zurück zum  Buch Cyborg Mind - What Brain–Computer and Mind–Cyberspace Interfaces Mean for Cyberneuroethics"
Cyborg Mind What Brain–Computer and Mind–Cyberspace Interfaces Mean for Cyberneuroethics