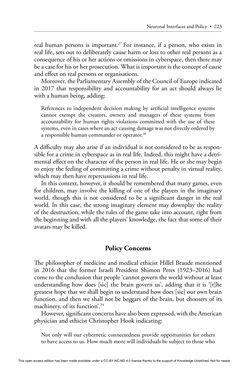 Neuronal Interfaces and Policy • 223 real human persons is important.27 For instance, if a person, who exists in real life, sets out to deliberately cause harm or loss to other real persons as a consequence of his or her actions or omissions in cyberspace, then there may be a case for his or her prosecution. What is important is the concept of cause and effect on real persons or organisations. Moreover, the Parliamentary Assembly of the Council of Europe indicated in 2017 that responsibility and accountability for an act should always lie with a human being, adding: References to independent decision making by artificial intelligence systems cannot exempt the creators, owners and managers of these systems from accountability for human rights violations committed with the use of these systems, even in cases where an act causing damage was not directly ordered by a responsible human commander or operator.28 A difficulty may also arise if an individual is not considered to be as respon- sible for a crime in cyberspace as in real life. Indeed, this might have a detri- mental effect on the character of the person in real life. He or she may begin to enjoy the feeling of committing a crime without penalty in virtual reality, which may then have repercussions in real life. In this context, however, it should be remembered that many games, even for children, may involve the killing of one of the players in the imaginary world, though this is not considered to be a significant danger in the real world. In this case, the strong imaginary element may downplay the reality of the destruction, while the rules of the game take into account, right from the beginning and with all the players’ knowledge, the fact that some of their avatars may be killed. Policy Concerns The philosopher of medicine and medical ethicist Hillel Braude mentioned in 2016 that the former Israeli President Shimon Peres (1923–2016) had come to the conclusion that people ‘cannot govern the world without at least understanding how does [sic] the brain govern us’, adding that it is ‘[t]he greatest hope that we shall begin to understand how does [sic] our own brain function, and then we shall not be beggars of the brain, but choosers of its machinery, of its function’.29 However, significant concerns have also been expressed, with the American physician and ethicist Christopher Hook indicating: Not only will our cybernetic connectedness provide opportunities for others to have access to us. How much more will individuals be subject to those who This open access edition has been made available under a CC-BY-NC-ND 4.0 license thanks to the support of Knowledge Unlatched. Not for resale.
zurück zum  Buch Cyborg Mind - What Brain–Computer and Mind–Cyberspace Interfaces Mean for Cyberneuroethics"
Cyborg Mind What Brain–Computer and Mind–Cyberspace Interfaces Mean for Cyberneuroethics