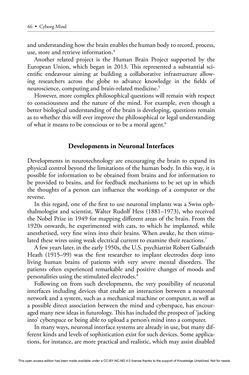 46 • Cyborg Mind and understanding how the brain enables the human body to record, process, use, store and retrieve information.4 Another related project is the Human Brain Project supported by the European Union, which began in 2013. This represented a substantial sci- entific endeavour aiming at building a collaborative infrastructure allow- ing researchers across the globe to advance knowledge in the fields of neuroscience, computing and brain-related medicine.5 However, more complex philosophical questions will remain with respect to consciousness and the nature of the mind. For example, even though a better biological understanding of the brain is developing, questions remain as to whether this will ever improve the philosophical or legal understanding of what it means to be conscious or to be a moral agent.6 Developments in Neuronal Interfaces Developments in neurotechnology are encouraging the brain to expand its physical control beyond the limitations of the human body. In this way, it is possible for information to be obtained from brains and for information to be provided to brains, and for feedback mechanisms to be set up in which the thoughts of a person can influence the workings of a computer or the reverse. In this regard, one of the first to use neuronal implants was a Swiss oph- thalmologist and scientist, Walter Rudolf Hess (1881–1973), who received the Nobel Prize in 1949 for mapping different areas of the brain. From the 1920s onwards, he experimented with cats, to which he implanted, while anesthetised, very fine wires into their brains. When awake, he then stimu- lated these wires using weak electrical current to examine their reactions.7 A few years later, in the early 1950s, the U.S. psychiatrist Robert Galbraith Heath (1915–99) was the first researcher to implant electrodes deep into living human brains of patients with very severe mental disorders. The patients often experienced remarkable and positive changes of moods and personalities using the stimulated electrodes.8 Following on from such developments, the very possibility of neuronal interfaces including devices that enable an interaction between a neuronal network and a system, such as a mechanical machine or computer, as well as a possible direct association between the mind and cyberspace, has encour- aged many new ideas in futurology. This has included the prospect of ‘jacking into’ cyberspace or being able to upload a person’s mind into a computer. In many ways, neuronal interface systems are already in use, but many dif- ferent kinds and levels of sophistication exist for such devices. Some applica- tions, for instance, are more practical and realistic, which may assist disabled This open access edition has been made available under a CC-BY-NC-ND 4.0 license thanks to the support of Knowledge Unlatched. Not for resale.
zurück zum  Buch Cyborg Mind - What Brain–Computer and Mind–Cyberspace Interfaces Mean for Cyberneuroethics"
Cyborg Mind What Brain–Computer and Mind–Cyberspace Interfaces Mean for Cyberneuroethics