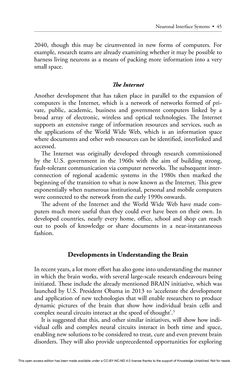 Neuronal Interface Systems • 45 2040, though this may be cirumvented in new forms of computers. For example, research teams are already examining whether it may be possible to harness living neurons as a means of packing more information into a very small space. The Internet Another development that has taken place in parallel to the expansion of computers is the Internet, which is a network of networks formed of pri- vate, public, academic, business and government computers linked by a broad array of electronic, wireless and optical technologies. The Internet supports an extensive range of information resources and services, such as the applications of the World Wide Web, which is an information space where documents and other web resources can be identified, interlinked and accessed. The Internet was originally developed through research commissioned by the U.S. government in the 1960s with the aim of building strong, fault- tolerant communication via computer networks. The subsequent inter- connection of regional academic systems in the 1980s then marked the beginning of the transition to what is now known as the Internet. This grew exponentially when numerous institutional, personal and mobile computers were connected to the network from the early 1990s onwards. The advent of the Internet and the World Wide Web have made com- puters much more useful than they could ever have been on their own. In developed countries, nearly every home, office, school and shop can reach out to pools of knowledge or share documents in a near-instantaneous fashion. Developments in Understanding the Brain In recent years, a lot more effort has also gone into understanding the manner in which the brain works, with several large-scale research endeavours being initiated. These include the already mentioned BRAIN initiative, which was launched by U.S. President Obama in 2013 to ‘accelerate the development and application of new technologies that will enable researchers to produce dynamic pictures of the brain that show how individual brain cells and complex neural circuits interact at the speed of thought’.3 It is suggested that this, and other similar initiatives, will show how indi- vidual cells and complex neural circuits interact in both time and space, enabling new solutions to be considered to treat, cure and even prevent brain disorders. They will also provide unprecedented opportunities for exploring This open access edition has been made available under a CC-BY-NC-ND 4.0 license thanks to the support of Knowledge Unlatched. Not for resale.
zurück zum  Buch Cyborg Mind - What Brain–Computer and Mind–Cyberspace Interfaces Mean for Cyberneuroethics"
Cyborg Mind What Brain–Computer and Mind–Cyberspace Interfaces Mean for Cyberneuroethics