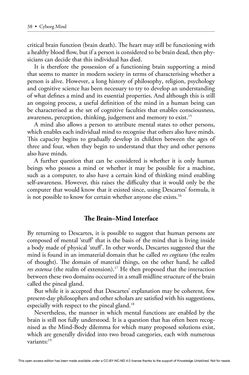 38 • Cyborg Mind critical brain function (brain death). The heart may still be functioning with a healthy blood flow, but if a person is considered to be brain dead, then phy- sicians can decide that this individual has died. It is therefore the possession of a functioning brain supporting a mind that seems to matter in modern society in terms of characterising whether a person is alive. However, a long history of philosophy, religion, psychology and cognitive science has been necessary to try to develop an understanding of what defines a mind and its essential properties. And although this is still an ongoing process, a useful definition of the mind in a human being can be characterised as the set of cognitive faculties that enables consciousness, awareness, perception, thinking, judgement and memory to exist.15 A mind also allows a person to attribute mental states to other persons, which enables each individual mind to recognise that others also have minds. This capacity begins to gradually develop in children between the ages of three and four, when they begin to understand that they and other persons also have minds. A further question that can be considered is whether it is only human beings who possess a mind or whether it may be possible for a machine, such as a computer, to also have a certain kind of thinking mind enabling self-awareness. However, this raises the difficulty that it would only be the computer that would know that it existed since, using Descartes’ formula, it is not possible to know for certain whether anyone else exists.16 The Brain–Mind Interface By returning to Descartes, it is possible to suggest that human persons are composed of mental ‘stuff’ that is the basis of the mind that is living inside a body made of physical ‘stuff’. In other words, Descartes suggested that the mind is found in an immaterial domain that he called res cogitans (the realm of thought). The domain of material things, on the other hand, he called res extensa (the realm of extension).17 He then proposed that the interaction between these two domains occurred in a small midline structure of the brain called the pineal gland. But while it is accepted that Descartes’ explanation may be coherent, few present-day philosophers and other scholars are satisfied with his suggestions, especially with respect to the pineal gland.18 Nevertheless, the manner in which mental functions are enabled by the brain is still not fully understood. It is a question that has often been recog- nised as the Mind-Body dilemma for which many proposed solutions exist, which are generally divided into two broad categories, each with numerous variants:19 This open access edition has been made available under a CC-BY-NC-ND 4.0 license thanks to the support of Knowledge Unlatched. Not for resale.
zurück zum  Buch Cyborg Mind - What Brain–Computer and Mind–Cyberspace Interfaces Mean for Cyberneuroethics"
Cyborg Mind What Brain–Computer and Mind–Cyberspace Interfaces Mean for Cyberneuroethics