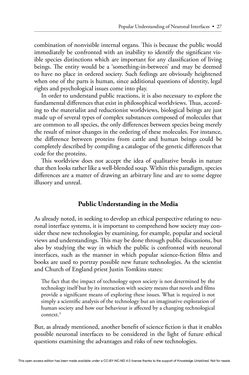 Popular Understanding of Neuronal  Interfaces • 27 combination of nonvisible internal organs. This is because the public would immediately be confronted with an inability to identify the significant vis- ible species distinctions which are important for any classification of living beings. The entity would be a ‘something-in-between’ and may be deemed to have no place in ordered society. Such feelings are obviously heightened when one of the parts is human, since additional questions of identity, legal rights and psychological issues come into play. In order to understand public reactions, it is also necessary to explore the fundamental differences that exist in philosophical worldviews. Thus, accord- ing to the materialist and reductionist worldviews, biological beings are just made up of several types of complex substances composed of molecules that are common to all species, the only differences between species being merely the result of minor changes in the ordering of these molecules. For instance, the difference between proteins from cattle and human beings could be completely described by compiling a catalogue of the genetic differences that code for the proteins. This worldview does not accept the idea of qualitative breaks in nature that then looks rather like a well-blended soup. Within this paradigm, species differences are a matter of drawing an arbitrary line and are to some degree illusory and unreal. Public Understanding in the Media As already noted, in seeking to develop an ethical perspective relating to neu- ronal interface systems, it is important to comprehend how society may con- sider these new technologies by examining, for example, popular and societal views and understandings. This may be done through public discussions, but also by studying the way in which the public is confronted with neuronal interfaces, such as the manner in which popular science-fiction films and books are used to portray possible new future technologies. As the scientist and Church of England priest Justin Tomkins states: The fact that the impact of technology upon society is not determined by the technology itself but by its interaction with society means that novels and films provide a significant means of exploring these issues. What is required is not simply a scientific analysis of the technology but an imaginative exploration of human society and how our behaviour is affected by a changing technological context.3 But, as already mentioned, another benefit of science fiction is that it enables possible neuronal interfaces to be considered in the light of future ethical questions examining the advantages and risks of new technologies. This open access edition has been made available under a CC-BY-NC-ND 4.0 license thanks to the support of Knowledge Unlatched. Not for resale.
zurück zum  Buch Cyborg Mind - What Brain–Computer and Mind–Cyberspace Interfaces Mean for Cyberneuroethics"
Cyborg Mind What Brain–Computer and Mind–Cyberspace Interfaces Mean for Cyberneuroethics