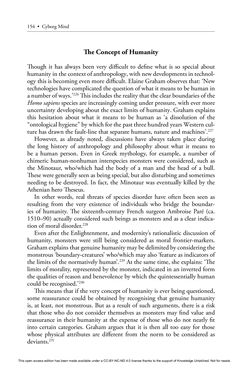 154 • Cyborg Mind The Concept of Humanity Though it has always been very difficult to define what is so special about humanity in the context of anthropology, with new developments in technol- ogy this is becoming even more difficult. Elaine Graham observes that: ‘New technologies have complicated the question of what it means to be human in a number of ways.’226 This includes the reality that the clear boundaries of the Homo sapiens species are increasingly coming under pressure, with ever more uncertainty developing about the exact limits of humanity. Graham explains this hesitation about what it means to be human as ‘a dissolution of the “ontological hygiene” by which for the past three hundred years Western cul- ture has drawn the fault-line that separate humans, nature and machines’.227 However, as already noted, discussions have always taken place during the long history of anthropology and philosophy about what it means to be a human person. Even in Greek mythology, for example, a number of chimeric human-nonhuman interspecies monsters were considered, such as the Minotaur, who/which had the body of a man and the head of a bull. These were generally seen as being special, but also disturbing and sometimes needing to be destroyed. In fact, the Minotaur was eventually killed by the Athenian hero Theseus. In other words, real threats of species disorder have often been seen as resulting from the very existence of individuals who bridge the boundar- ies of humanity. The sixteenth-century French surgeon Ambroise Paré (ca. 1510–90) actually considered such beings as monsters and as a clear indica- tion of moral disorder.228 Even after the Enlightenment, and modernity’s rationalistic discussion of humanity, monsters were still being considered as moral frontier-markers. Graham explains that genuine humanity may be delimited by considering the monstrous ‘boundary-creatures’ who/which may also ‘feature as indicators of the limits of the normatively human’.229 At the same time, she explains: ‘The limits of morality, represented by the monster, indicated in an inverted form the qualities of reason and benevolence by which the quintessentially human could be recognised.’230 This means that if the very concept of humanity is ever being questioned, some reassurance could be obtained by recognising that genuine humanity is, at least, not monstrous. But as a result of such arguments, there is a risk that those who do not consider themselves as monsters may find value and reassurance in their humanity at the expense of those who do not neatly fit into certain categories. Graham argues that it is then all too easy for those whose physical attributes are different from the norm to be considered as deviants.231 This open access edition has been made available under a CC-BY-NC-ND 4.0 license thanks to the support of Knowledge Unlatched. Not for resale.
zurück zum  Buch Cyborg Mind - What Brain–Computer and Mind–Cyberspace Interfaces Mean for Cyberneuroethics"
Cyborg Mind What Brain–Computer and Mind–Cyberspace Interfaces Mean for Cyberneuroethics