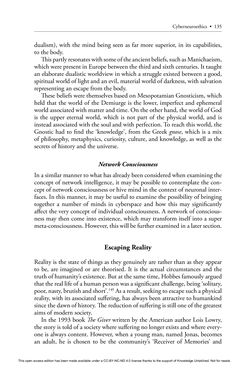 Cyberneuroethics • 135 dualism), with the mind being seen as far more superior, in its capabilities, to the body. This partly resonates with some of the ancient beliefs, such as Manichaeism, which were present in Europe between the third and sixth centuries. It taught an elaborate dualistic worldview in which a struggle existed between a good, spiritual world of light and an evil, material world of darkness, with salvation representing an escape from the body. These beliefs were themselves based on Mesopotamian Gnosticism, which held that the world of the Demiurge is the lower, imperfect and ephemeral world associated with matter and time. On the other hand, the world of God is the upper eternal world, which is not part of the physical world, and is instead associated with the soul and with perfection. To reach this world, the Gnostic had to find the ‘knowledge’, from the Greek gnose, which is a mix of philosophy, metaphysics, curiosity, culture, and knowledge, as well as the secrets of history and the universe. Network Consciousness In a similar manner to what has already been considered when examining the concept of network intelligence, it may be possible to contemplate the con- cept of network consciousness or hive mind in the context of neuronal inter- faces. In this manner, it may be useful to examine the possibility of bringing together a number of minds in cyberspace and how this may significantly affect the very concept of individual consciousness. A network of conscious- ness may then come into existence, which may transform itself into a super meta-consciousness. However, this will be further examined in a later section. Escaping Reality Reality is the state of things as they genuinely are rather than as they appear to be, are imagined or are theorised. It is the actual circumstances and the truth of humanity’s existence. But at the same time, Hobbes famously argued that the real life of a human person was a significant challenge, being ‘solitary, poor, nasty, brutish and short’.149 As a result, seeking to escape such a physical reality, with its associated suffering, has always been attractive to humankind since the dawn of history. The reduction of suffering is still one of the greatest aims of modern society. In the 1993 book The Giver written by the American author Lois Lowry, the story is told of a society where suffering no longer exists and where every- one is always content. However, when a young man, named Jonas, becomes an adult, he is chosen to be the community’s ‘Receiver of Memories’ and This open access edition has been made available under a CC-BY-NC-ND 4.0 license thanks to the support of Knowledge Unlatched. Not for resale.
zurück zum  Buch Cyborg Mind - What Brain–Computer and Mind–Cyberspace Interfaces Mean for Cyberneuroethics"
Cyborg Mind What Brain–Computer and Mind–Cyberspace Interfaces Mean for Cyberneuroethics