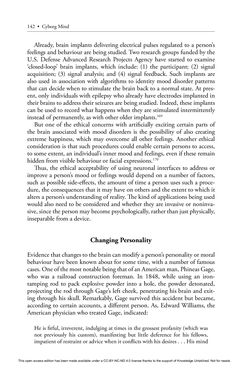 142 • Cyborg Mind Already, brain implants delivering electrical pulses regulated to a person’s feelings and behaviour are being studied. Two research groups funded by the U.S. Defense Advanced Research Projects Agency have started to examine ‘closed-loop’ brain implants, which include: (1) the participant; (2) signal acquisition; (3) signal analysis; and (4) signal feedback. Such implants are also used in association with algorithms to identity mood disorder patterns that can decide when to stimulate the brain back to a normal state. At pres- ent, only individuals with epilepsy who already have electrodes implanted in their brains to address their seizures are being studied. Indeed, these implants can be used to record what happens when they are stimulated intermittently instead of permanently, as with other older implants.169 But one of the ethical concerns with artificially exciting certain parts of the brain associated with mood disorders is the possibility of also creating extreme happiness, which may overcome all other feelings. Another ethical consideration is that such procedures could enable certain persons to access, to some extent, an individual’s inner mood and feelings, even if these remain hidden from visible behaviour or facial expressions.170 Thus, the ethical acceptability of using neuronal interfaces to address or improve a person’s mood or feelings would depend on a number of factors, such as possible side-effects, the amount of time a person uses such a proce- dure, the consequences that it may have on others and the extent to which it alters a person’s understanding of reality. The kind of applications being used would also need to be considered and whether they are invasive or noninva- sive, since the person may become psychologically, rather than just physically, inseparable from a device. Changing Personality Evidence that changes to the brain can modify a person’s personality or moral behaviour have been known about for some time, with a number of famous cases. One of the most notable being that of an American man, Phineas Gage, who was a railroad construction foreman. In 1848, while using an iron- tamping rod to pack explosive powder into a hole, the powder detonated, projecting the rod through Gage’s left cheek, penetrating his brain and exit- ing through his skull. Remarkably, Gage survived this accident but became, according to certain accounts, a different person. As, Edward Williams, the American physician who treated Gage, indicated: He is fitful, irreverent, indulging at times in the grossest profanity (which was not previously his custom), manifesting but little deference for his fellows, impatient of restraint or advice when it conflicts with his desires . . . His mind This open access edition has been made available under a CC-BY-NC-ND 4.0 license thanks to the support of Knowledge Unlatched. Not for resale.
zurück zum  Buch Cyborg Mind - What Brain–Computer and Mind–Cyberspace Interfaces Mean for Cyberneuroethics"
Cyborg Mind What Brain–Computer and Mind–Cyberspace Interfaces Mean for Cyberneuroethics