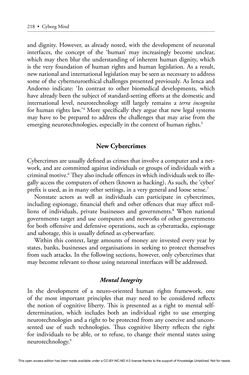 218 • Cyborg Mind and dignity. However, as already noted, with the development of neuronal interfaces, the concept of the ‘human’ may increasingly become unclear, which may then blur the understanding of inherent human dignity, which is the very foundation of human rights and human legislation. As a result, new national and international legislation may be seen as necessary to address some of the cyberneuroethical challenges presented previously. As Ienca and Andorno indicate: ‘In contrast to other biomedical developments, which have already been the subject of standard-setting efforts at the domestic and international level, neurotechnology still largely remains a terra incognita for human rights law.’4 More specifically they argue that new legal systems may have to be prepared to address the challenges that may arise from the emerging neurotechnologies, especially in the context of human rights.5 New Cybercrimes Cybercrimes are usually defined as crimes that involve a computer and a net- work, and are committed against individuals or groups of individuals with a criminal motive.6 They also include offences in which individuals seek to ille- gally access the computers of others (known as hacking). As such, the ‘cyber’ prefix is used, as in many other settings, in a very general and loose sense.7 Nonstate actors as well as individuals can participate in cybercrimes, including espionage, financial theft and other offences that may affect mil- lions of individuals, private businesses and governments.8 When national governments target and use computers and networks of other governments for both offensive and defensive operations, such as cyberattacks, espionage and sabotage, this is usually defined as cyberwarfare. Within this context, large amounts of money are invested every year by states, banks, businesses and organisations in seeking to protect themselves from such attacks. In the following sections, however, only cybercrimes that may become relevant to those using neuronal interfaces will be addressed. Mental Integrity In the development of a neuro-oriented human rights framework, one of the most important principles that may need to be considered reflects the notion of cognitive liberty. This is presented as a right to mental self- determination, which includes both an individual right to use emerging neurotechnologies and a right to be protected from any coercive and uncon- sented use of such technologies. Thus cognitive liberty reflects the right for individuals to be able, or to refuse, to change their mental states using neurotechnology.9 This open access edition has been made available under a CC-BY-NC-ND 4.0 license thanks to the support of Knowledge Unlatched. Not for resale.
zurück zum  Buch Cyborg Mind - What Brain–Computer and Mind–Cyberspace Interfaces Mean for Cyberneuroethics"
Cyborg Mind What Brain–Computer and Mind–Cyberspace Interfaces Mean for Cyberneuroethics