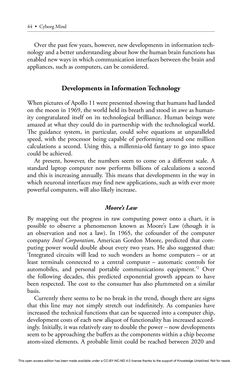 44 • Cyborg Mind Over the past few years, however, new developments in information tech- nology and a better understanding about how the human brain functions has enabled new ways in which communication interfaces between the brain and appliances, such as computers, can be considered. Developments in Information Technology When pictures of Apollo 11 were presented showing that humans had landed on the moon in 1969, the world held its breath and stood in awe as human- ity congratulated itself on its technological brilliance. Human beings were amazed at what they could do in partnership with the technological world. The guidance system, in particular, could solve equations at unparalleled speed, with the processor being capable of performing around one million calculations a second. Using this, a millennia-old fantasy to go into space could be achieved. At present, however, the numbers seem to come on a different scale. A standard laptop computer now performs billions of calculations a second and this is increasing annually. This means that developments in the way in which neuronal interfaces may find new applications, such as with ever more powerful computers, will also likely increase. Moore’s Law By mapping out the progress in raw computing power onto a chart, it is possible to observe a phenomenon known as Moore’s Law (though it is an observation and not a law). In 1965, the cofounder of the computer company Intel Corporation, American Gordon Moore, predicted that com- puting power would double about every two years. He also suggested that: ‘Integrated circuits will lead to such wonders as home computers  – or at least terminals connected to a central computer  – automatic controls for automobiles, and personal portable communications equipment.’2 Over the following decades, this predicted exponential growth appears to have been respected. The cost to the consumer has also plummeted on a similar basis. Currently there seems to be no break in the trend, though there are signs that this line may not simply stretch out indefinitely. As companies have increased the technical functions that can be squeezed into a computer chip, development costs of each new aliquot of functionality has increased accord- ingly. Initially, it was relatively easy to double the power  – now developments seem to be approaching the buffers as the components within a chip become atom-sized elements. A probable limit could be reached between 2020 and This open access edition has been made available under a CC-BY-NC-ND 4.0 license thanks to the support of Knowledge Unlatched. Not for resale.
zurück zum  Buch Cyborg Mind - What Brain–Computer and Mind–Cyberspace Interfaces Mean for Cyberneuroethics"
Cyborg Mind What Brain–Computer and Mind–Cyberspace Interfaces Mean for Cyberneuroethics