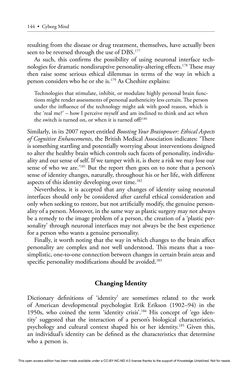 144 • Cyborg Mind resulting from the disease or drug treatment, themselves, have actually been seen to be reversed through the use of DBS.177 As such, this confirms the possibility of using neuronal interface tech- nologies for dramatic nondisruptive personality-altering effects.178 These may then raise some serious ethical dilemmas in terms of the way in which a person considers who he or she is.179 As Cheshire explains: Technologies that stimulate, inhibit, or modulate highly personal brain func- tions might render assessments of personal authenticity less certain. The person under the influence of the technology might ask with good reason, which is the ‘real me?’  – how I perceive myself and am inclined to think and act when the switch is turned on, or when it is turned off?180 Similarly, in its 2007 report entitled Boosting Your Brainpower: Ethical Aspects of Cognitive Enhancements, the British Medical Association indicates: ‘There is something startling and potentially worrying about interventions designed to alter the healthy brain which controls such facets of personality, individu- ality and our sense of self. If we tamper with it, is there a risk we may lose our sense of who we are.’181 But the report then goes on to note that a person’s sense of identity changes, naturally, throughout his or her life, with different aspects of this identity developing over time.182 Nevertheless, it is accepted that any changes of identity using neuronal interfaces should only be considered after careful ethical consideration and only when seeking to restore, but not artificially modify, the genuine person- ality of a person. Moreover, in the same way as plastic surgery may not always be a remedy to the image problem of a person, the creation of a ‘plastic per- sonality’ through neuronal interfaces may not always be the best experience for a person who wants a genuine personality. Finally, it worth noting that the way in which changes to the brain affect personality are complex and not well understood. This means that a too- simplistic, one-to-one connection between changes in certain brain areas and specific personality modifications should be avoided.183 Changing Identity Dictionary definitions of ‘identity’ are sometimes related to the work of American developmental psychologist Erik Erikson (1902–94) in the 1950s, who coined the term ‘identity crisis’.184 His concept of ‘ego iden- tity’ suggested that the interaction of a person’s biological characteristics, psychology and cultural context shaped his or her identity.185 Given this, an individual’s identity can be defined as the characteristics that determine who a person is. This open access edition has been made available under a CC-BY-NC-ND 4.0 license thanks to the support of Knowledge Unlatched. Not for resale.
zurück zum  Buch Cyborg Mind - What Brain–Computer and Mind–Cyberspace Interfaces Mean for Cyberneuroethics"
Cyborg Mind What Brain–Computer and Mind–Cyberspace Interfaces Mean for Cyberneuroethics