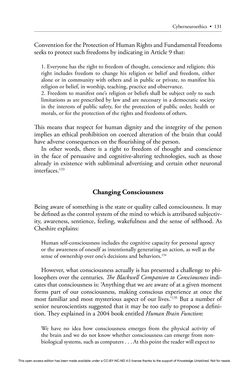 Cyberneuroethics • 131 Convention for the Protection of Human Rights and Fundamental Freedoms seeks to protect such freedoms by indicating in Article 9 that: 1. Everyone has the right to freedom of thought, conscience and religion; this right includes freedom to change his religion or belief and freedom, either alone or in community with others and in public or private, to manifest his religion or belief, in worship, teaching, practice and observance. 2. Freedom to manifest one’s religion or beliefs shall be subject only to such limitations as are prescribed by law and are necessary in a democratic society in the interests of public safety, for the protection of public order, health or morals, or for the protection of the rights and freedoms of others. This means that respect for human dignity and the integrity of the person implies an ethical prohibition on coerced alteration of the brain that could have adverse consequences on the flourishing of the person. In other words, there is a right to freedom of thought and conscience in the face of persuasive and cognitive-altering technologies, such as those already in existence with subliminal advertising and certain other neuronal interfaces.133 Changing Consciousness Being aware of something is the state or quality called consciousness. It may be defined as the control system of the mind to which is attributed subjectiv- ity, awareness, sentience, feeling, wakefulness and the sense of selfhood. As Cheshire explains: Human self-consciousness includes the cognitive capacity for personal agency or the awareness of oneself as intentionally generating an action, as well as the sense of ownership over one’s decisions and behaviors.134 However, what consciousness actually is has presented a challenge to phi- losophers over the centuries. The Blackwell Companion to Consciousness indi- cates that consciousness is: ‘Anything that we are aware of at a given moment forms part of our consciousness, making conscious experience at once the most familiar and most mysterious aspect of our lives.’135 But a number of senior neuroscientists suggested that it may be too early to propose a defini- tion. They explained in a 2004 book entitled Human Brain Function: We have no idea how consciousness emerges from the physical activity of the brain and we do not know whether consciousness can emerge from non- biological systems, such as computers . . . At this point the reader will expect to This open access edition has been made available under a CC-BY-NC-ND 4.0 license thanks to the support of Knowledge Unlatched. Not for resale.
zurück zum  Buch Cyborg Mind - What Brain–Computer and Mind–Cyberspace Interfaces Mean for Cyberneuroethics"
Cyborg Mind What Brain–Computer and Mind–Cyberspace Interfaces Mean for Cyberneuroethics