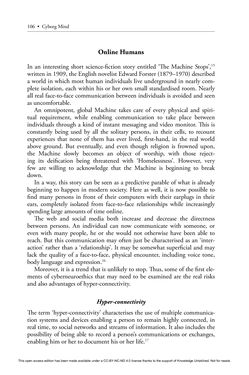 106 • Cyborg Mind Online Humans In an interesting short science-fiction story entitled ‘The Machine Stops’,15 written in 1909, the English novelist Edward Forster (1879–1970) described a world in which most human individuals live underground in nearly com- plete isolation, each within his or her own small standardised room. Nearly all real face-to-face communication between individuals is avoided and seen as uncomfortable. An omnipotent, global Machine takes care of every physical and spiri- tual requirement, while enabling communication to take place between individuals through a kind of instant messaging and video monitor. This is constantly being used by all the solitary persons, in their cells, to recount experiences that none of them has ever lived, first-hand, in the real world above ground. But eventually, and even though religion is frowned upon, the Machine slowly becomes an object of worship, with those reject- ing its deification being threatened with ‘Homelessness’. However, very few are willing to acknowledge that the Machine is beginning to break down. In a way, this story can be seen as a predictive parable of what is already beginning to happen in modern society. Here as well, it is now possible to find many persons in front of their computers with their earplugs in their ears, completely isolated from face-to-face relationships while increasingly spending large amounts of time online. The web and social media both increase and decrease the directness between persons. An individual can now communicate with someone, or even with many people, he or she would not otherwise have been able to reach. But this communication may often just be characterised as an ‘inter- action’ rather than a ‘relationship’. It may be somewhat superficial and may lack the quality of a face-to-face, physical encounter, including voice tone, body language and expression.16 Moreover, it is a trend that is unlikely to stop. Thus, some of the first ele- ments of cyberneuroethics that may need to be examined are the real risks and also advantages of hyper-connectivity. Hyper-connectivity The term ‘hyper-connectivity’ characterises the use of multiple communica- tion systems and devices enabling a person to remain highly connected, in real time, to social networks and streams of information. It also includes the possibility of being able to record a person’s communications or exchanges, enabling him or her to document his or her life.17 This open access edition has been made available under a CC-BY-NC-ND 4.0 license thanks to the support of Knowledge Unlatched. Not for resale.
zurück zum  Buch Cyborg Mind - What Brain–Computer and Mind–Cyberspace Interfaces Mean for Cyberneuroethics"
Cyborg Mind What Brain–Computer and Mind–Cyberspace Interfaces Mean for Cyberneuroethics