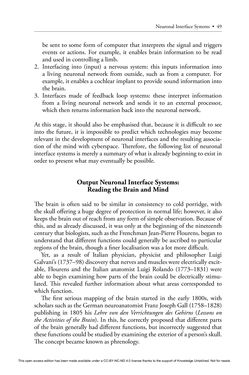 Neuronal Interface Systems • 49 be sent to some form of computer that interprets the signal and triggers events or actions. For example, it enables brain information to be read and used in controlling a limb. 2. Interfacing into (input) a nervous system: this inputs information into a living neuronal network from outside, such as from a computer. For example, it enables a cochlear implant to provide sound information into the brain. 3. Interfaces made of feedback loop systems: these interpret information from a living neuronal network and sends it to an external processor, which then returns information back into the neuronal network. At this stage, it should also be emphasised that, because it is difficult to see into the future, it is impossible to predict which technologies may become relevant in the development of neuronal interfaces and the resulting associa- tion of the mind with cyberspace. Therefore, the following list of neuronal interface systems is merely a summary of what is already beginning to exist in order to present what may eventually be possible. Output Neuronal Interface Systems: Reading  the  Brain  and  Mind The brain is often said to be similar in consistency to cold porridge, with the skull offering a huge degree of protection in normal life; however, it also keeps the brain out of reach from any form of simple observation. Because of this, and as already discussed, it was only at the beginning of the nineteenth century that biologists, such as the Frenchman Jean-Pierre Flourens, began to understand that different functions could generally be ascribed to particular regions of the brain, though a finer localisation was a lot more difficult. Yet, as a result of Italian physician, physicist and philosopher Luigi Galvani’s (1737–98) discovery that nerves and muscles were electrically excit- able, Flourens and the Italian anatomist Luigi Rolando (1773–1831) were able to begin examining how parts of the brain could be electrically stimu- lated. This revealed further information about what areas corresponded to which function. The first serious mapping of the brain started in the early 1800s, with scholars such as the German neuroanatomist Franz Joseph Gall (1758–1828) publishing in 1805 his Lehre von den Verrichtungen des Gehirns (Lessons on the Activities of the Brain). In this, he correctly proposed that different parts of the brain generally had different functions, but incorrectly suggested that these functions could be studied by examining the exterior of a person’s skull. The concept became known as phrenology. This open access edition has been made available under a CC-BY-NC-ND 4.0 license thanks to the support of Knowledge Unlatched. Not for resale.
zurück zum  Buch Cyborg Mind - What Brain–Computer and Mind–Cyberspace Interfaces Mean for Cyberneuroethics"
Cyborg Mind What Brain–Computer and Mind–Cyberspace Interfaces Mean for Cyberneuroethics