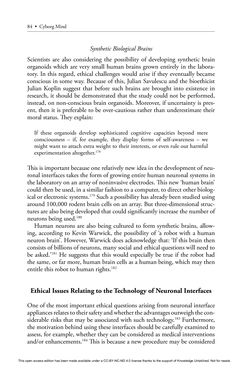 84 • Cyborg Mind Synthetic Biological Brains Scientists are also considering the possibility of developing synthetic brain organoids which are very small human brains grown entirely in the labora- tory. In this regard, ethical challenges would arise if they eventually became conscious in some way. Because of this, Julian Savulescu and the bioethicist Julian Koplin suggest that before such brains are brought into existence in research, it should be demonstrated that the study could not be performed, instead, on non-conscious brain organoids. Moreover, if uncertainty is pres- ent, then it is preferable to be over-cautious rather than underestimate their moral status. They explain: If these organoids develop sophisticated cognitive capacities beyond mere consciousness  – if, for example, they display forms of self-awareness  – we might want to attach extra weight to their interests, or even rule out harmful experimentation altogether.178 This is important because one relatively new idea in the development of neu- ronal interfaces takes the form of growing entire human neuronal systems in the laboratory on an array of noninvasive electrodes. This new ‘human brain’ could then be used, in a similar fashion to a computer, to direct other biolog- ical or electronic systems.179 Such a possibility has already been studied using around 100,000 rodent brain cells on an array. But three-dimensional struc- tures are also being developed that could significantly increase the number of neurons being used.180 Human neurons are also being cultured to form synthetic brains, allow- ing, according to Kevin Warwick, the possibility of ‘a robot with a human neuron brain’. However, Warwick does acknowledge that: ‘If this brain then consists of billions of neurons, many social and ethical questions will need to be asked.’181 He suggests that this would especially be true if the robot had the same, or far more, human brain cells as a human being, which may then entitle this robot to human rights.182 Ethical Issues Relating to the Technology of Neuronal Interfaces One of the most important ethical questions arising from neuronal interface appliances relates to their safety and whether the advantages outweigh the con- siderable risks that may be associated with such technology.183 Furthermore, the motivation behind using these interfaces should be carefully examined to assess, for example, whether they can be considered as medical interventions and/or enhancements.184 This is because a new procedure may be considered This open access edition has been made available under a CC-BY-NC-ND 4.0 license thanks to the support of Knowledge Unlatched. Not for resale.
zurück zum  Buch Cyborg Mind - What Brain–Computer and Mind–Cyberspace Interfaces Mean for Cyberneuroethics"
Cyborg Mind What Brain–Computer and Mind–Cyberspace Interfaces Mean for Cyberneuroethics