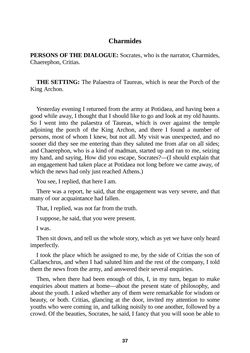 Charmides PERSONS OF THE DIALOGUE: Socrates, who is the narrator, Charmides, Chaerephon, Critias. THE SETTING: The Palaestra of Taureas, which is near the Porch of the King Archon. Yesterday evening I returned from the army at Potidaea, and having been a good while away, I thought that I should like to go and look at my old haunts. So I went into the palaestra of Taureas, which is over against the temple adjoining the porch of the King Archon, and there I found a number of persons, most of whom I knew, but not all. My visit was unexpected, and no sooner did they see me entering than they saluted me from afar on all sides; and Chaerephon, who is a kind of madman, started up and ran to me, seizing my hand, and saying, How did you escape, Socrates?—(I should explain that an engagement had taken place at Potidaea not long before we came away, of which the news had only just reached Athens.) You see, I replied, that here I am. There was a report, he said, that the engagement was very severe, and that many of our acquaintance had fallen. That, I replied, was not far from the truth. I suppose, he said, that you were present. I was. Then sit down, and tell us the whole story, which as yet we have only heard imperfectly. I took the place which he assigned to me, by the side of Critias the son of Callaeschrus, and when I had saluted him and the rest of the company, I told them the news from the army, and answered their several enquiries. Then, when there had been enough of this, I, in my turn, began to make enquiries about matters at home—about the present state of philosophy, and about the youth. I asked whether any of them were remarkable for wisdom or beauty, or both. Critias, glancing at the door, invited my attention to some youths who were coming in, and talking noisily to one another, followed by a crowd. Of the beauties, Socrates, he said, I fancy that you will soon be able to 37
zurück zum  Buch The Complete Plato"
The Complete Plato