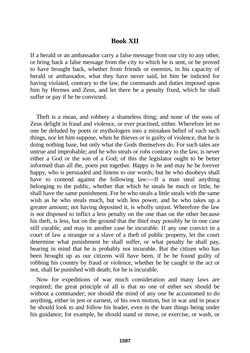 Book XII If a herald or an ambassador carry a false message from our city to any other, or bring back a false message from the city to which he is sent, or be proved to have brought back, whether from friends or enemies, in his capacity of herald or ambassador, what they have never said, let him be indicted for having violated, contrary to the law, the commands and duties imposed upon him by Hermes and Zeus, and let there be a penalty fixed, which he shall suffer or pay if he be convicted. Theft is a mean, and robbery a shameless thing; and none of the sons of Zeus delight in fraud and violence, or ever practised, either. Wherefore let no one be deluded by poets or mythologers into a mistaken belief of such such things, nor let him suppose, when he thieves or is guilty of violence, that he is doing nothing base, but only what the Gods themselves do. For such tales are untrue and improbable; and he who steals or robs contrary to the law, is never either a God or the son of a God; of this the legislator ought to be better informed than all the, poets put together. Happy is he and may he be forever happy, who is persuaded and listens to our words; but he who disobeys shall have to contend against the following law:—If a man steal anything belonging to the public, whether that which he steals be much or little, he shall have the same punishment. For he who steals a little steals with the same wish as he who steals much, but with less power, and he who takes up a greater amount; not having deposited it, is wholly unjust. Wherefore the law is not disposed to inflict a less penalty on the one than on the other because his theft, is less, but on the ground that the thief may possibly be in one case still curable, and may in another case be incurable. If any one convict in a court of law a stranger or a slave of a theft of public property, let the court determine what punishment he shall suffer, or what penalty he shall pay, bearing in mind that he is probably not incurable. But the citizen who has been brought up as our citizens will have been, if he be found guilty of robbing his country by fraud or violence, whether he be caught in the act or not, shall be punished with death; for he is incurable. Now for expeditions of war much consideration and many laws are required; the great principle of all is that no one of either sex should be without a commander; nor should the mind of any one be accustomed to do anything, either in jest or earnest, of his own motion, but in war and in peace he should look to and follow his leader, even in the least things being under his guidance; for example, he should stand or move, or exercise, or wash, or 1587
zurück zum  Buch The Complete Plato"
The Complete Plato