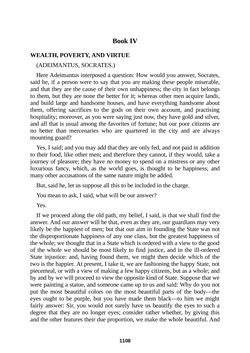 Book IV WEALTH, POVERTY, AND VIRTUE (ADEIMANTUS, SOCRATES.) Here Adeimantus interposed a question: How would you answer, Socrates, said he, if a person were to say that you are making these people miserable, and that they are the cause of their own unhappiness; the city in fact belongs to them, but they are none the better for it; whereas other men acquire lands, and build large and handsome houses, and have everything handsome about them, offering sacrifices to the gods on their own account, and practising hospitality; moreover, as you were saying just now, they have gold and silver, and all that is usual among the favorites of fortune; but our poor citizens are no better than mercenaries who are quartered in the city and are always mounting guard? Yes, I said; and you may add that they are only fed, and not paid in addition to their food, like other men; and therefore they cannot, if they would, take a journey of pleasure; they have no money to spend on a mistress or any other luxurious fancy, which, as the world goes, is thought to be happiness; and many other accusations of the same nature might be added. But, said he, let us suppose all this to be included in the charge. You mean to ask, I said, what will be our answer? Yes. If we proceed along the old path, my belief, I said, is that we shall find the answer. And our answer will be that, even as they are, our guardians may very likely be the happiest of men; but that our aim in founding the State was not the disproportionate happiness of any one class, but the greatest happiness of the whole; we thought that in a State which is ordered with a view to the good of the whole we should be most likely to find justice, and in the ill-ordered State injustice: and, having found them, we might then decide which of the two is the happier. At present, I take it, we are fashioning the happy State, not piecemeal, or with a view of making a few happy citizens, but as a whole; and by and by we will proceed to view the opposite kind of State. Suppose that we were painting a statue, and someone came up to us and said: Why do you not put the most beautiful colors on the most beautiful parts of the body—the eyes ought to be purple, but you have made them black—to him we might fairly answer: Sir, you would not surely have us beautify the eyes to such a degree that they are no longer eyes; consider rather whether, by giving this and the other features their due proportion, we make the whole beautiful. And 1108
zurück zum  Buch The Complete Plato"
The Complete Plato