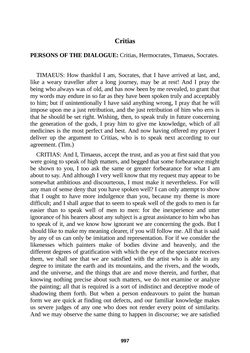 Critias PERSONS OF THE DIALOGUE: Critias, Hermocrates, Timaeus, Socrates. TIMAEUS: How thankful I am, Socrates, that I have arrived at last, and, like a weary traveller after a long journey, may be at rest! And I pray the being who always was of old, and has now been by me revealed, to grant that my words may endure in so far as they have been spoken truly and acceptably to him; but if unintentionally I have said anything wrong, I pray that he will impose upon me a just retribution, and the just retribution of him who errs is that he should be set right. Wishing, then, to speak truly in future concerning the generation of the gods, I pray him to give me knowledge, which of all medicines is the most perfect and best. And now having offered my prayer I deliver up the argument to Critias, who is to speak next according to our agreement. (Tim.) CRITIAS: And I, Timaeus, accept the trust, and as you at first said that you were going to speak of high matters, and begged that some forbearance might be shown to you, I too ask the same or greater forbearance for what I am about to say. And although I very well know that my request may appear to be somewhat ambitious and discourteous, I must make it nevertheless. For will any man of sense deny that you have spoken well? I can only attempt to show that I ought to have more indulgence than you, because my theme is more difficult; and I shall argue that to seem to speak well of the gods to men is far easier than to speak well of men to men: for the inexperience and utter ignorance of his hearers about any subject is a great assistance to him who has to speak of it, and we know how ignorant we are concerning the gods. But I should like to make my meaning clearer, if you will follow me. All that is said by any of us can only be imitation and representation. For if we consider the likenesses which painters make of bodies divine and heavenly, and the different degrees of gratification with which the eye of the spectator receives them, we shall see that we are satisfied with the artist who is able in any degree to imitate the earth and its mountains, and the rivers, and the woods, and the universe, and the things that are and move therein, and further, that knowing nothing precise about such matters, we do not examine or analyze the painting; all that is required is a sort of indistinct and deceptive mode of shadowing them forth. But when a person endeavours to paint the human form we are quick at finding out defects, and our familiar knowledge makes us severe judges of any one who does not render every point of similarity. And we may observe the same thing to happen in discourse; we are satisfied 997
zurück zum  Buch The Complete Plato"
The Complete Plato