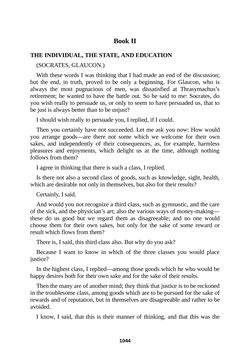 Book II THE INDIVIDUAL, THE STATE, AND EDUCATION (SOCRATES, GLAUCON.) With these words I was thinking that I had made an end of the discussion; but the end, in truth, proved to be only a beginning. For Glaucon, who is always the most pugnacious of men, was dissatisfied at Thrasymachus’s retirement; he wanted to have the battle out. So he said to me: Socrates, do you wish really to persuade us, or only to seem to have persuaded us, that to be just is always better than to be unjust? I should wish really to persuade you, I replied, if I could. Then you certainly have not succeeded. Let me ask you now: How would you arrange goods—are there not some which we welcome for their own sakes, and independently of their consequences, as, for example, harmless pleasures and enjoyments, which delight us at the time, although nothing follows from them? I agree in thinking that there is such a class, I replied. Is there not also a second class of goods, such as knowledge, sight, health, which are desirable not only in themselves, but also for their results? Certainly, I said. And would you not recognize a third class, such as gymnastic, and the care of the sick, and the physician’s art; also the various ways of money-making— these do us good but we regard them as disagreeable; and no one would choose them for their own sakes, but only for the sake of some reward or result which flows from them? There is, I said, this third class also. But why do you ask? Because I want to know in which of the three classes you would place justice? In the highest class, I replied—among those goods which he who would be happy desires both for their own sake and for the sake of their results. Then the many are of another mind; they think that justice is to be reckoned in the troublesome class, among goods which are to be pursued for the sake of rewards and of reputation, but in themselves are disagreeable and rather to be avoided. I know, I said, that this is their manner of thinking, and that this was the 1044
zurück zum  Buch The Complete Plato"
The Complete Plato