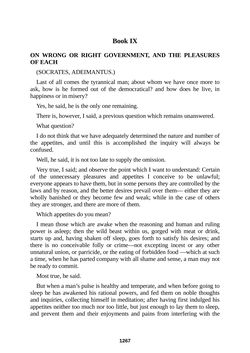 Book IX ON WRONG OR RIGHT GOVERNMENT, AND THE PLEASURES OF EACH (SOCRATES, ADEIMANTUS.) Last of all comes the tyrannical man; about whom we have once more to ask, how is he formed out of the democratical? and how does he live, in happiness or in misery? Yes, he said, he is the only one remaining. There is, however, I said, a previous question which remains unanswered. What question? I do not think that we have adequately determined the nature and number of the appetites, and until this is accomplished the inquiry will always be confused. Well, he said, it is not too late to supply the omission. Very true, I said; and observe the point which I want to understand: Certain of the unnecessary pleasures and appetites I conceive to be unlawful; everyone appears to have them, but in some persons they are controlled by the laws and by reason, and the better desires prevail over them— either they are wholly banished or they become few and weak; while in the case of others they are stronger, and there are more of them. Which appetites do you mean? I mean those which are awake when the reasoning and human and ruling power is asleep; then the wild beast within us, gorged with meat or drink, starts up and, having shaken off sleep, goes forth to satisfy his desires; and there is no conceivable folly or crime—not excepting incest or any other unnatural union, or parricide, or the eating of forbidden food —which at such a time, when he has parted company with all shame and sense, a man may not be ready to commit. Most true, he said. But when a man’s pulse is healthy and temperate, and when before going to sleep he has awakened his rational powers, and fed them on noble thoughts and inquiries, collecting himself in meditation; after having first indulged his appetites neither too much nor too little, but just enough to lay them to sleep, and prevent them and their enjoyments and pains from interfering with the 1267
zurück zum  Buch The Complete Plato"
The Complete Plato