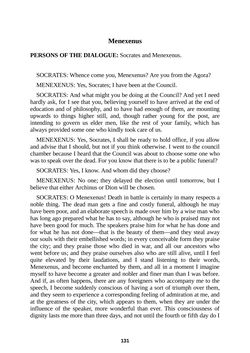 Menexenus PERSONS OF THE DIALOGUE: Socrates and Menexenus. SOCRATES: Whence come you, Menexenus? Are you from the Agora? MENEXENUS: Yes, Socrates; I have been at the Council. SOCRATES: And what might you be doing at the Council? And yet I need hardly ask, for I see that you, believing yourself to have arrived at the end of education and of philosophy, and to have had enough of them, are mounting upwards to things higher still, and, though rather young for the post, are intending to govern us elder men, like the rest of your family, which has always provided some one who kindly took care of us. MENEXENUS: Yes, Socrates, I shall be ready to hold office, if you allow and advise that I should, but not if you think otherwise. I went to the council chamber because I heard that the Council was about to choose some one who was to speak over the dead. For you know that there is to be a public funeral? SOCRATES: Yes, I know. And whom did they choose? MENEXENUS: No one; they delayed the election until tomorrow, but I believe that either Archinus or Dion will be chosen. SOCRATES: O Menexenus! Death in battle is certainly in many respects a noble thing. The dead man gets a fine and costly funeral, although he may have been poor, and an elaborate speech is made over him by a wise man who has long ago prepared what he has to say, although he who is praised may not have been good for much. The speakers praise him for what he has done and for what he has not done—that is the beauty of them—and they steal away our souls with their embellished words; in every conceivable form they praise the city; and they praise those who died in war, and all our ancestors who went before us; and they praise ourselves also who are still alive, until I feel quite elevated by their laudations, and I stand listening to their words, Menexenus, and become enchanted by them, and all in a moment I imagine myself to have become a greater and nobler and finer man than I was before. And if, as often happens, there are any foreigners who accompany me to the speech, I become suddenly conscious of having a sort of triumph over them, and they seem to experience a corresponding feeling of admiration at me, and at the greatness of the city, which appears to them, when they are under the influence of the speaker, more wonderful than ever. This consciousness of dignity lasts me more than three days, and not until the fourth or fifth day do I 131
zurück zum  Buch The Complete Plato"
The Complete Plato